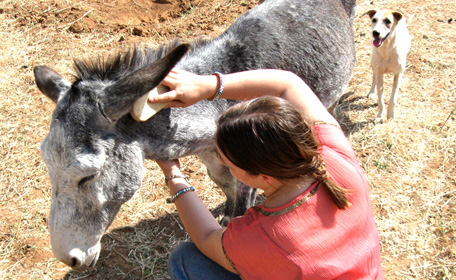 Eco-tourism has been of great interest to me lately. Though it’s always been on my radar, I really started to focus on it after I received an email last fall from VegNews Magazine Managing Editor, Elizabeth Castoria, asking whether, although she knows it’s not my “regular beat,” I would write a feature about the eco-tourism conundrum and what it truly means to travel green? So I delved into the subject and quickly realized that I had opened a Pandora’s Box, as there was just so much to learn …

My article, “(Car)Bon Voyage,” is in the March/April issue of VegNews, which means if you have a subscription, you will get it any day, and if you don’t have one (um, why don’t you?), you can get it at your local newsstand (like Whole Foods, Barnes & Nobles, Borders, etc.) starting around March 1.

Because I hope you pick up a real live hard copy of the issue, I’m not going to tell you the outcome of my story, but let’s just say it was a shocker. It produced for me several grey hairs and an unrelenting need to shed light on this oftentimes-deceptive industry. But on the flip-side, it also introduced me to some remarkable entrepreneurs who are absolutely true to their ethics.

Like, for example, Zac Lovas of VegVoyages — the vegetarian tour-group that is organizing the 100% vegan 12-day adventure to India. In addition to the trip being exclusively vegan, their sustainability promise includes supporting local businesses and small farms, and even including volunteer-time at a local animal sanctuary as part of the trip. From their website:

For the duration of your adventure, our objective is to take you as far away from your world as possible and completely immerse you into the culture, customs, traditions and daily life of another. Also, with VegVoyages the vegetarian is no longer the odd-one-out. No more having to “go hungry” and subsist on salads and side dishes. Catering to the needs of vegans and vegetarians is our specialty and commitment, and every adventure is designed to introduce you to some of the tastiest veggie food that we have found in the region.

VegVoyages is a perfect example of taking your passion, knowledge, and advocacy and plugging it into a business that enlightens, educates, and creates change for animals and the planet. Truly awesome.

Oh, and did I mention that VegNews is now sponsoring the trip to India? Which means that not only do you get to enjoy the trip of a lifetime, but you’ll be joined by VegNews publishers Colleen Holland and Joseph Connelly — two of the grooviest and most compassionate folks you’re likely to rub elbows with.

Whether you’re thinking about joining this adventure to India, or you’re using either VegVoyages or VegNews as models of successful vegan businesses that might one day inspire your own, let’s take a minute to stop and smell the pesticide-free rose-bush: Even though it’s easy to feel like a misunderstood vegan in a non-vegan world (duh), it’s also evident that as vegan entrepreneurs are fighting the good fight, many are making enormous strides in mainstreaming the message.

Thank goodness, too, because I would rather not go completely grey before I hit 35.