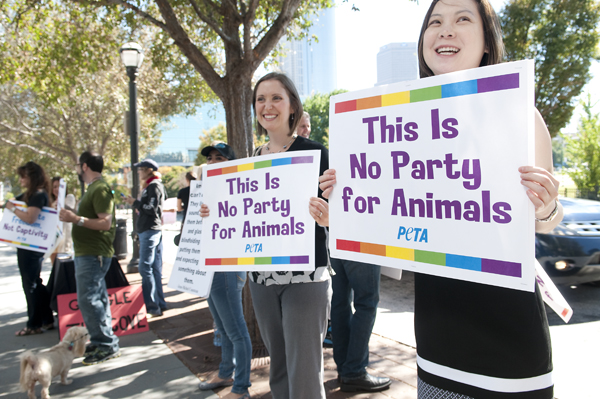 Whether you’re a newbie vegan or seasoned animal advocate, it’s always a great idea to expand your repertoire of activism. In this #ThrowbackThursday article, Alison Mercer shares how she did just that by participating in her first protest.
This article’s originally appeared on Our Hen House on March 17, 2014. If you’d like to see a certain OHH article resurrected, email us at info [at] ourhenhouse [dot] org.
***
Are you intrigued by protesting but a little scared by the prospect of actually doing it? Read this piece by Alison Mercer — one of our favorite bloggers (and, lucky for us, an OHH board member) — for inspiration. She went from being a circus attender to a circus protester, and has a few tips for anyone who wants to incorporate this type of activism into their repertoire.
*** 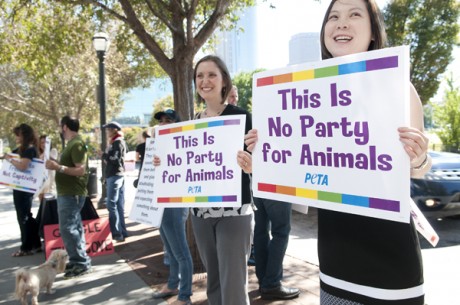 The night before my first protest, I was on PETA’s website reading the guide to best practices, hoping to ease my crazed mind and my nervous stomach (I was painfully aware of the fact that the media was going to be there snapping pictures of us holding up signs). Although I knew the basics, like to not wear sunglasses so others could make eye contact with me, I wasn’t sure what to expect once I got out there in front of the Georgia Aquarium.
The next day, sporting a sign saying “This is no party for animals,” I joined fellow PETA protestors in our quest to get the Atlanta Pride Festival organizers to move the opening party to a different, more humane, venue. While I stood there, trying to change the hearts and minds of the organizers as well as the patrons of the aquarium, I had a shameful flashback. A short 10 months prior to this event, I was inside the very walls of the aquarium I was protesting. On this visit, I stared at the wildlife in captivity, completely unaware of the truth behind the glass enclosures. It wasn’t until I became vegan and watched documentaries like Blackfish that I fully understood the cruelty that I was contributing to when visiting places like the Georgia Aquarium. At the protest, I was painfully aware that these people passing by on the streets to go see the orcas weren’t strangers – they were me. If I could change in that short amount of time, maybe they could too.
There was a time when I said I would never have the guts to participate in a protest. But I’ve changed. As I’ve learned about animal rights, I’ve become a different person – hopefully a kinder, more compassionate one – and something has shifted inside of me, driving me to step outside my comfort zone. I’ve been hit head-on with the truth about animal suffering, and I want to help make a positive difference in the lives of the animals. I mean, how could I not?
I’m definitely not the same person as I was just last year, when I recounted my experiences attending the Big Apple Circus. Leaving the show, I was heartbroken. In my gut, I knew something was inherently wrong with horses and dogs being included in the event. I mean, six horses crammed into a 40-foot ring doing tricks just didn’t seem natural to me. Why was everyone around me so blind to this? Why had I been? Even though I had scoured the Internet before attending the circus, trying to find out if there was abuse behind the scenes at the Big Apple, I couldn’t find anything. Not one thing. Everything I read was about Ringling Brothers and how it was deemed “The Cruelest Show on Earth.” So, I went with my family, to be a good sport and to not be the new weirdo vegan of the family. By complete coincidence, the very next day, I received an email leaflet from an animal rights organization explaining how all circuses that use animals are awful. It went on to say that the animals are slaves who need to be freed. That statement alone was so powerful that I was moved to learn more. So, I educated myself even more on animal exploitation, and once I did, my blinders were lifted and I could see the hideous cruelty that lay behind every action committed by someone using an animal to make money. I vowed to change my life, and to use the power I have to speak up for exploited animals – such as the ones I had just witnessed being forced to perform. I know now, and suspected then, that when it comes to animals used in and for any industry, there is so much more than meets the eye.
Some may question – and I probably did at some point too – whether a small protest on the side of the road targeting a major multi-billion dollar company like Ringling Brothers can solve anything. Well, perhaps it won’t make a difference immediately, but – and I strongly believe this – never say never. Just take a look at what’s happening with the release of Blackfish, and how SeaWorld is tanking – fast. It’s all because of activists getting the word out and sharing the truth with others. You have to wonder how many people have had their perception of SeaWorld shifted by protests. Protests are a vitally important way of inspiring change and affecting the bottom line of major companies. Being exposed to that is how the light turns on for so many consumers. It’s the driving force making them change their ways. We all change. I sure did.
Now, preparing for what will be my second protest, I feel much more confident, but, admittedly, I still have butterflies. They will never go away completely – I’ve learned that, for me, the nerves are just part of the whole experience (for now, anyway). I’ve been doing my share of research on PETA’s website about Ringling and how horribly they treat the animals. They have tons of really compelling content, including a harrowing but must-see infographic. And this Alec Baldwin video stood as a pretty comprehensive description of what goes on under the big top:

I don’t know if I’ll ever actually feel completely cool, calm and collected when it comes to a protest, but knowing that I got through my first one unscathed will make this time easier than the last.
Here are a few tips that I found helpful while attending my first protest: 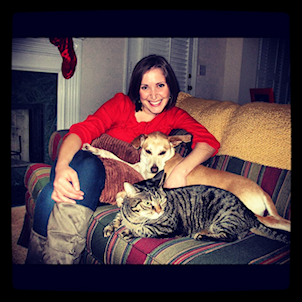 Alison Mercer lives in Georgia with her husband and their adopted dog and cat. Alison is the director of annual programs for a higher education institution, and has been in the fundraising field for the past ten years. In her spare time, Alison enjoys writing about vegan recipes and animal rights issues on her blog, Running on Vegan; attending her local vegan book club; running and training for 10Ks and half-marathons; and serving as an activist with her local animal rights organization, Georgia Animal Rights and Protection (GARP).
Share 0 FacebookTwitterPinterestEmail
previous post

Episode 360: Ari Solomon of Mercy for Animals, and Brianna Krejchi of...