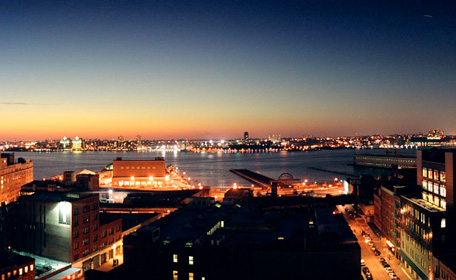 We could not be more excited about an upcoming art exhibit opening May 9 in NYC’s meatpacking district. Jonathan Horowitz will be restaging his 2002 exhibition, “Go Vegan,” which was described by the New York Times as “fuel[ing] any doubts one might have about eating meat.” The new version of the exhibit will have an expanded emphasis on the climate change impact of meat eating.

Since Horowitz is known for the irony inherent in many of his works, it comes as no surprise that the exhibition will be at Gavin Brown’s enterprise, a gallery which has just vastly expanded its space into that formerly occupied by its erstwhile neighbor, Pat LaFrieda Meats. (Unfortunately, the meat packing company will not be closing down — just moving to cheaper digs in New Jersey). Apparently, the exhibit will use some of the equipment left behind by the meat packer.

Horowitz certainly seems to be the real deal. In a 2009 NY Times profile, he listed the Lower East Side’s vegan emporium MooShoes as his favorite store.

Episode 15: “To ALL compassion gives”