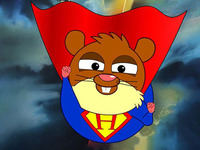 The world of online entertainment is a nut just waiting to be cracked by imaginative, animal-friendly gamesters and animators. It’s so perfect. You can create your own world (isn’t that what all of us animal activists want to do?). You can populate it with animals who are winning the fight against the abusers (of course). And you can engage kids (and adults), while teaching them a thing or two about what’s really going on with animals.
In fact, this is a nut that is being worked over by animal activists as we speak, and the latest one is, fortunately enough, rather good at nut-cracking, since he is a hamster. (Did you see how I worked that metaphor?!)
Created by GFZ Group, Hamstrong is an imprisoned laboratory hamster who outsmarts his captors and dedicates his freedom to rescuing other animal captives. He is currently appearing in his own iPhone game, for free. He is also the star of a music video and, if the stars align, he will also soon be the star of an animated web series. The guy definitely gets around.
The trailer web series, aptly titled Hamstrong, will use a combination of truth and humor to educate viewers on the horrors of animal testing in addition to promoting cruelty-free testing. In order to fund the production, the studio has started a Kickstarter campaign.
Watch Hamstrong make his death-defying escape in the series’ trailer below:

Turpentine Turkey, A.K.A. “The Photo Bomber”

Episode 203: “The highest form of wisdom is kindness.”

Why You Should “Crush It”