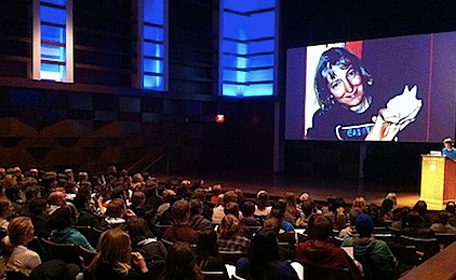 So here we are in Los Angeles, at the National Animal Rights Conference. I had the honor of speaking on two panels, Newcomer Orientation II: How Successful Activists Became Involved and What They Learned (humbly in the company of Gene Baur, Alex Pacheco, and Peter Young), and Promoting Your Cause on the Internet (alongside the fabulous Andrew Kirschner and talented Leigh-Chantelle Koch). Mariann spoke on the panel Enacting Protective Laws (also in the great company of Gene Baur, Virginia Handley, and Peter Muller). We are beyond thrilled to be here. Not only are we learning so much and connecting with activists nationwide, but we truly feel a reinvigorated sense of hope and inspiration. It’s part of the beauty of conferences. 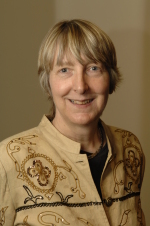 We vegans are so used to being alone in the world. But at these gatherings of new and seasoned activists, things seem possible again, and we are — for a few days, anyway — in the majority. For me, this sense of community renews my spirit and my drive. We will go out and change the world for animals. There is simply no other choice.

By far the best part of the conference, though, was Saturday night’s banquet. Though I frequently eye-roll at the prospect of attending a banquet of any kind (I never seem to have appropriate attire, and the thought of hundreds of people squished into a room can be dizzying), the AR Conference banquet was — by far — the exception.

Each year at the AR Conference, an activist of great esteem is awarded a place in the U.S. Animal Rights Hall of Fame. The honorees, who are chosen by the speakers of that year’s conference, are people who have, according to the website, “made an outstanding contribution to the advancement of animal rights in the United States for at least ten years.” Past recipients have included Ingrid Newkirk, Peter Singer, and Henry Spira — not too shabby, eh? 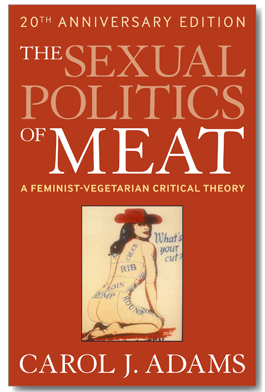 “The Sexual Politics of Meat” by Carol J. Adams

This year’s honor went to an activist whose work has been incredibly influential in my own activism, luminary Carol J. Adams, author of The Sexual Politics of Meat: A Feminist-Vegetarian Theory.

About 8 years ago, after already being involved with the AIDS awareness movement and the gay rights movement, I extended my activism to encompass animal rights. When I learned the truth about what is happening to animals, my life — and its purpose — took on new meaning. As I’m sure happened to many of you, after I got over the initial shock and the constant question — how could I not have known?! — which played over and over again in my head, I decided to devote my life to changing the world for animals. Shortly thereafter, someone gave me a copy of The Sexual Politics of Meat, and once again, my life was never the same.

Carol’s mind-altering theories about the patriarchy of meat, and the meat-filled meal inherently carrying with it an absent referent, made so much sense that I finished the dense book in just a few days. I went on to read Pornography of Meat and Living Among Meat Eaters (a book that I recommend incessantly to people — especially new vegans — who grapple with how to cope once they learn about the horrors of animal exploitation).

So you can imagine the THUMP! that came when I hit the floor after Mariann and I were asked by Carol to accept the award on her behalf. And you can further imagine the uncontrollable flutter of the butterflies in my stomach two nights ago when Mariann and I stood up in a room full of several hundred activists, many of whom are our heroes and mentors, as we read the speech that Carol would have presented herself, had she been able to make it to the event. We are truly humbled and deeply honored by the invitation to stand at the podium on behalf of Carol — a true visionary who brought to the fore of animal rights the vital connection to feminist theory that nobody prior had thought about. And we are equally delighted that Carol agreed to let us print her moving acceptance speech from Saturday night:

I asked Mariann and Jasmin to represent me tonight because I value the collective, dialogic voice… represented by two fabulous activist and visionary women. Please check our their website https://www.ourhenhouse.org/

I want to thank the speakers who voted for me to enter the animal rights hall of fame. I am honored. I know their work and appreciate their vision and what they have accomplished.

I know that now the conference consciously works to structure itself to be inclusive, and that it is an important meeting place and source of information. I hope it also continues to be a safe place for the less dominant members of our activist community.

I find that the animal rights community often tilts toward its male theorists, male philosophers. Thank you for tonight recognizing a theorist who doesn’t fit that type.

I have been on the boundary between several movements, and I have found that some of my time has been spent providing a critique of one movement from the insights of the others. Some of you old timers tonight will remember how other feminists and I challenged sexual harassment and male favoritism at conferences such as this.

Frankly, the work can be exhausting, and it doesn’t always make friends!

It’s a long road but we’re not alone.

As Susan B. Anthony said about her work in the nineteenth-century to gain women’s equal rights, “I never grew discouraged because I knew that my cause was just, and I was always in good company.”

It’s been 21 years since The Sexual Politics of Meat was published. I first recognized that connections exist between meat eating and a patriarchal world, between feminism and vegetarianism, 37 years ago.

In The Sexual Politics of Meat, I argue that animals, especially those who are eaten and used to produce dairy and eggs, are absent referents. They disappear as subjects.

Using my theoretical framework, I would say that our activism is aimed toward freeing animals from being absent referents and eliminating the structures of oppression and inequality that permit the creation of the absent referent.

It is important work, but no matter how many successes we experience individually or in the movement, it can be soul wearying and body-wearying….  Please take time to take care of yourselves.

And in a world structured on dominance and inequality we can’t lose sight that animals are not the only absent referents and so we must be careful with each other, and alert to the kinds of unexamined privileges we each may have.

I think part of the value of the publication of The Sexual Politics of Meat twenty-one years ago, is that it helped animal rights activists place their activism within the context of social justice. It offered a language, a framework, a theory. Many activists had always intuited there was a connection; my book provided a way of thinking about the reality and the territory of that connection. Many readers have told me how my book changed their lives.

I want you to know that having readers who really got the book and made it their own, has changed my life. I am so, so lucky that the animal rights movement in its strength and its growth, provided me with excellent readers.

Let me ask you a favor. If you read The Sexual Politics of Meat and it mattered to you, tell some one else, encourage someone else to read it.

I am not with you because I am with my family. My father died almost a year ago, and my family is together, in part, to mark his passing and celebrate his life.

Probably like many of you, I did not have a completely easy time with my family, especially my father, who for years believed in eating corpses and was impatient with their absence at a meal. But I found that he loosened up when he entered his eighties. So, for those of you who are now the age I was when I began my activism, don’t give up with your family, and don’t let the alienation eat you up inside.

It may only take, um, thirty years …! Really, I am joking here. I know it can be painful not being heard in your family. So I will put in a shameless plug for my book, Living Among Meat Eaters. I hear from activists who reread it every year. It’s got some good advice, especially for arguments with families and friends. But basically: Don’t get sucked into their problems.

A year ago April, I was with my father who had been ill, when I started getting Facebook messages saying “Carol, turn on Law and Order SVU. I could swear you were just on.”  We animal rights activists had all been encouraged to watch this episode—the Beef Episode—because it included some underground footage shot at a slaughterhouse. But before we get to that scene, there is a scene that, when I saw it, I almost fell off my chair.  What I saw was a fictional representation of me showing Law and Order’s version of The Sexual Politics of Meat Slide Show. My fictional counterpart was saying,  “Our society views women and animals pretty much the same… as cuts of meat.” “Meat eating and the patriarchal world go hand in hand.”

I am sorry I cannot be here tonight. I am sure the conference, as usual, is empowering but also overwhelming in terms of content, images, contacts, and, yes, pressure. But it would have been fun to find myself here, at the podium, a podium that in the past often seemed to represent the power of male privilege. (Sorry Alex, but you know me.)

Here is one way I measure whether the male dominance of animal rights is subsiding. I will know we have made progress when we no longer hear the (anxious) claim that we are “no longer just little old ladies in tennis shoes.”

To me that is saying, the animal rights movement has been rescued from nonimportance, by yes, white males (and their theories).

When I started being an activist for animals, I wasn’t a little old lady. But, each year I get closer to being one. (And when someone offers to carry my vegan groceries to my car I wonder if I have arrived at that point and no one told me). Why has the movement been so anxious to cut its connection to little old ladies?  When no one else cared, I can tell you, the little old ladies cared.

We know that the British antivivisection movement of the nineteenth century would have collapsed without women. Women still constitute the majority of animal rights activists. You start working when you are in your late teens or twenties and, hey, before you know it, someone is carrying your groceries for you.

If you hear that claim about little old ladies, I hope you will challenge it.

And may many many blessings flow to the Earth and all its creatures from your lives and your work. Thank you.

Thank you, Carol J. Adams, for being a true inspiration to animal activists everywhere, and for changing the shape of the animal rights movement. You’re far from being a little old lady, but Carol, when you are one, we will happily sit beside you on your porch, rocking in our little old lady rocking chairs, and listen intently to your stories.