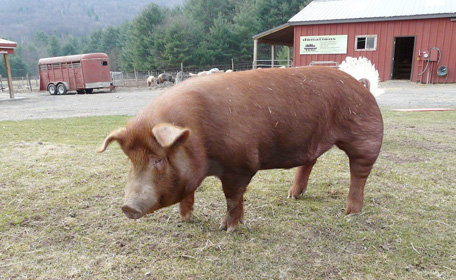 I’m lucky enough to know writer and publicist Maya Gottfried, today’s visiting animal here in Our Hen House. I first met Maya (over email, anyhow) several years ago, while I was on staff at Farm Sanctuary. She was passionate and articulate, and wanted to do everything she could to help the animal rights cause. We stayed in touch, but didn’t become friends until earlier this year, just before her children’s book – Our Farm: By the Animals of Farm Sanctuary – was published. Though Maya had published children’s books before, Our Farm was extra special to her – it was her first book centering around the beauty, humor, and individual personalities of farm animals. It was a pivotal time in Maya’s life, too. She wrote the book while recovering from chemotherapy for colorectal cancer. She was 36.

Now cancer-free and energetic as ever, Maya spends her days speaking out for animal rights by doing readings of Our Farm throughout the country, and, in her spare time, donating her publicist skills to various animal-related causes (such as, I’m proud to say, Our Hen House).

I find the story of how Maya discovered the activist within her – and found her passion for animal issues – to be both rousing and inspiring. One thing we always say here in Our Hen House is that, to step up your activism, you needn’t go any further than your skills, interests, and talents. Maya’s story perfectly illustrates the power that can bring.

Maya Gottfried agreed to share her story of how an off-beat roommate and a matted-haired kitty changed her life. 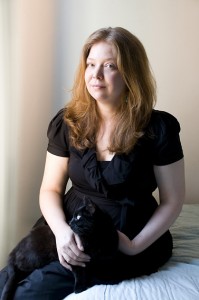 Like many other twenty-somethings, I found myself drawn to Brooklyn in the late ‘90s. I had grown up in Manhattan, which to me, and most of my childhood friends, was the only borough in New York City. Brooklyn seemed a far-off land. But as we grew older and as rents skyrocketed on our native island, my fellow Manhattanites and I began to migrate there, and Brooklyn quickly grew as a cultural mecca.

Along with my cats, Weed and Josie, I landed in a two-bedroom apartment in Williamsburg. It was cheap, close to friends, and had a deck that I rarely used. I stayed for a few years, through a series of roommates. I worked freelance, as a publicist and a writer. It seemed dreamy to me. My clients included a graffiti artist, Steven Severin (ex-Siouxsie & the Banshees), a goth record label, and the Brickbats (though, I didn’t so much represent them as hang out with my friend, Paul, who was a member of the band). I didn’t think myself extremely cool; I was just in awe of my own professional life. I was young, and I was living what in my eyes was the perfect life. I wasn’t wealthy, but I joked that if I needed the money desperately enough, I had a list of goth celebrity AOL Instant Messenger names that I could sell on eBay.

Then Annabelle blew in. She was a pixie-haired, out-and-proud, younger-than-me community-organizing professional activist who stormed through the apartment with a smile, and stocked the refrigerator with vegetarian food. Vegetarian food? Whatever. I didn’t really think anything of her ideals ― I didn’t really think about them at all. I thought her passion was silly, immature, and (at times) annoying. I remember my best friend, Elizabeth, and I sitting at the kitchen table one day sorting through nail polishes, while Annabelle marched around talking excitedly on the phone about one of her many causes. Elizabeth rolled her eyes at me. “I know,” I said. I thought of Annabelle as my crazy, activist roommate.

It was a little bit like The Odd Couple. Annabelle and I got along, but she laughed at my shiny clothing (her wardrobe was more corduroy and cotton), and I “forgot” to fill out the sign-up sheet supporting a new political party that she’d handed me. I think the moment that best sums up what I thought of her was when she was in the kitchen, talking to a friend, while I camped out on the couch watching one of my many TV shows. “I would go on welfare for my job!” she exclaimed with confidence and power. I thought smoke was going to come out of my ears. Why would someone want to go on welfare? And doesn’t she realize that people like me would be paying for that welfare?

Soon though, the excitement of daily emails from people I practically idolized, and the rewards of only contributing to the greater cultural conversation, began to grow tired. Somehow, I had gone from feeling on top, to feeling like a slave. I would stay up until 2 a.m., driven and working, but for what? Music and books can be food for the soul, but the messages I channeled weren’t nurturing. In the end, I was generally working the late-night hours only towards building the egos of my clients, and my own. One night, after hours of thankless work, I received an angry, substance-induced email from my most prized client, my punishment for asking a question.

Even in the moments that it was still fun, it felt empty. Though I sensed a dissatisfaction rising inside me, I didn’t quite realize what it was until Annabelle and I were preparing to move out of our split-screen abode, and I had a moment to step back and really look at my life. Piece by piece we both packed up to go our separate ways, but it dawned on me that all of my cool stuff didn’t add up to nearly the substance of her earthy but passionate ways.

Face to face we stood in the hall one day, towards the end, and she asked me, “So, what are you going to do?” And I told her what I never thought I would say. I wanted to do something more substantial; something for the world, something for the greater good.

It would take a few years from then to find my path. I finally stumbled upon it in the weeks following the untimely death of my close friend Paul, the one who had been in the Brickbats. Days later, my beloved companion cat, Weed, passed from kidney failure. I was practically in a daze from those events, which was when I took in a foster cat, whom I had named Mabel. I was determined to remove inches of matted hair that covered her little body. I spent hours sitting on the bathroom floor snipping off the mattes. In an effort to find her a permanent home, I created a MySpace page for her and added animal organizations as her “friends.” 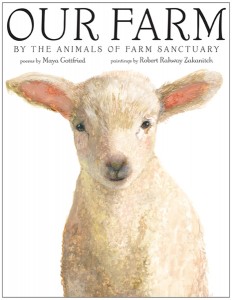 Our Farm by Maya Gottfried; Illustrated by Robert Rahway Zakanitch

That’s when I came across Farm Sanctuary’s page. I started visiting their website frequently, reading about the tragedy of factory farming and the solace that animals found at the organization’s two shelters. I became vegetarian and started to volunteer. Everything came organically then. I went vegan, and had the privilege of writing the children’s book Our Farm: By the Animals of Farm Sanctuary (Knopf Books for Young Readers), published earlier this year. Because of my previous experience as a publicist, it might not be surprising that, at the moment, one of the main ways I give back is by handling publicity for animal rights organizations, campaigns, and companies. Funny how it all goes full circle.

And, as it turned out, crazy little Annabelle was right. This life is much more fulfilling. I don’t feel empty. And I no longer feel like I’m chasing stardust, but instead I have the sense of walking in the sun.

Read more about Maya on Our Flock page.

Flock Only: Win a Copy of the BRAND NEW Book, “Vegan for...