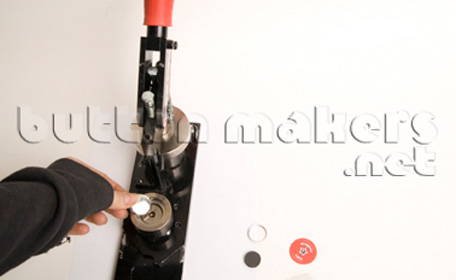 Remember Cabbage Patch Kids? Here’s my most visceral memory of that fad, circa 1983: I wanted one so badly that I couldn’t sleep. At that time, you could get one custom-made, so, after much begging, my mom gifted me one with red hair (because Grandma had — still has — red hair) and green eyes. Oddly, I named her “Casey” after Casey Kasem (who, coincidentally, is a vegan). Oh how I loved my Casey. But I still to this day have no idea what prompted me to cut off all of her beautiful red stringy hair. Maybe it was an early-on butch thing? 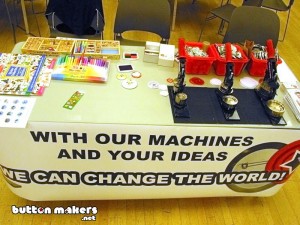 Regardless of my reasonings for craving a vinyl-headed, soft-bodied dollie, I am now reminded of my unrelenting yearning. That’s because of my most current craving: a button maker. And I want one real bad. Like, Cabbage Patch bad.

At first, I didn’t put two and two together: Why would a button making company be tabling at an animal rights conference? But then I noticed the ethical messaging on the buttons by the people at the table, and I thought: Aha! They’re vegan!

Rex Ray and Rebecca Bolte, the couple — and couple of activists — behind Buttonmakers.net, are vegans with a cause — hence their sponsoring of Let Live.

Face it: Your button collection of today could rival my Cabbage Patch Kids collection of the early 1980’s (and my subsequent Garbage Pail Kids trading cards collection of the mid-80’s). That’s because you’re vegan, and with your ethics, come buttons. So imagine if you had your very own button maker to make all those “go vegan” pins? 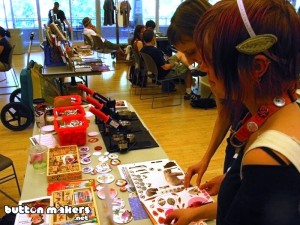 Or maybe you have a vegan business, or a non-profit, or even just a slogan that you really want to wear… Wouldn’t it be great to advertise the vegan message on your own self-made button? Especially for those of you who are in the market to make hundreds of these little gems, getting a button maker from Buttonmakers.net could save you money — and boredom, too, since, as I learned recently, making buttons is fun and delivers immediate satisfaction.

According to Anika Lehde (remember her? from Vegan Score?) who recently blogged on the button making duo:

“Now if you are going into the button-making business, run a non-profit, or are involved in activism or campaigns, then the investment in a button maker (starting around $215) […] is a very smart investment. The parts to make the buttons only cost about $.06 or .07 per button (depending on size and how many you are making). […] Plus button making is good team building for your volunteers. Word.”

And if, like Anika, you’re lucky enough to reside in Seattle, and are selfless enough to advocate for a good cause, you might even be able to rent a machine or barter for a rental.

As if it weren’t already evident, this sums up some of the reasons I love Buttonmakers.net:

Plus, buttons are a lot cooler than Cabbage Patch Kids, and you don’t have to worry about stupidly cutting off the string hair of a button maker, since button makers don’t have any hair at all.

OH — And if you happen to reside in NYC and you find yourself with a button maker, give me a shout. Because I really want to be your friend.

Don’t Eat the Dog (Or Anyone Else)