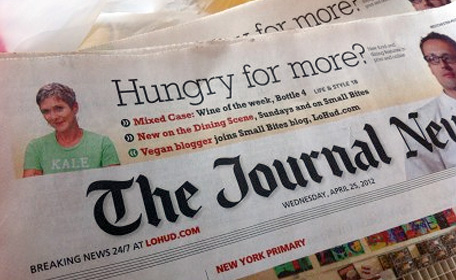 When we heard about the waves that writer and activist JL Fields (of JL Goes Vegan) was making in the world of vegan food activism, we nearly plotzed. This game-changing blogger and advocate is the embodiment of creative, delicious animal advocacy — carried out in a way that fully utilizes her talents, skills, and interests. “Food Activism” is something that we are quite passionate about (the best way to win people’s hearts is through their stomachs!), and so when JL told us about what she’s been up to, we knew we had to ask her to share it with you, our passionate and compassionate readers. Thankfully, before we had to resort to begging on her hands and knees, JL — who is also on our advisory board — said she’d love to. Brace yourselves to be inspired, and be prepared to take notes.

I have somehow found myself a vegan food activist. Truthfully, there was no plan, rhyme or reason to it. Yet it has happened, and I am delighted to share two examples.

I have been blogging about my vegan transition for nearly two years. Recently I participated in Vegan Mainstream’s blogger “boot camp” to sharpen my skills – and my message. One of our “assignments” was to seek opportunities to write guest posts; soon after that the food editor for my local newspaper put out a request for guest blogs to cover the local restaurant week. I responded and indicated that I wanted to write reviews from a vegan perspective. “A vegan and an omnivore walk into a bar…” angle, if you will (my husband is not vegan). I wrote three guest post reviews, and upon the conclusion of my guest blogger stint, I was offered the opportunity to write my own online column for the paper. A vegan column! The editor felt I offered a unique voice, offered a new perspective, and would be a great addition to their online content.

Last week my column I Eat Plants launched! I introduced myself to readers by describing my vegetarian to vegan journey. The next day The Journal News announced my column on the front page of the print edition!

For my second column submission, I interviewed a non-vegan chef of a non-vegetarian restaurant about why he offers plant-based options (clearly marked vegan) in every course on his menu. I plan to interview more local chefs about how they accommodate special, compassionate dining requests with the hope that it will encourage other local chefs to rethink how they approach vegan diners.

Which leads into my second example of vegan food activism. Last year I was in Pennsylvania to officiate at a wedding. I wasn’t needed at the wedding ceremony until 4:00 p.m. and, frankly, I wasn’t confident I was going to be able to eat much – both because of my role in the wedding, and an assumed lack of vegan options. I did a Google search to find a restaurant for lunch. Though I did not find a vegetarian restaurant, I did find an establishment that indicated they would accommodate vegans. I phoned ahead and the owner confirmed this.

I met the chef upon my arrival and, after a lovely conversation, he created a most exceptional meal.

I reviewed this experience on my blog and, in good fun, I challenged the chef to do a vegan weekend. I am proud to announce that the chef and I have stayed in touch for the past year, and on May 19, we’re putting on a 10-course vegan dining event!

I could not be more thrilled to work with a non-vegetarian restaurant on such an unashamedly vegan event!

So, how can you be a vegan food activist in your community?

JL Fields blogs about her transition to a vegan diet and lifestyle at JL goes Vegan: Food & Fitness with a Side of Kale. Her original recipes have been featured on Foodbuzz, DailyBuzz Healthy Living, BlogHer and Meatless Monday. She is the editor of the community blog Stop Chasing Skinny: Find Happiness Beyond the Scale. JL writes the weekly column “I Eat Plants” for The Journal News food blog, Small Bites, and is a contributor to Elephant Journal. JL is the founder and lead consultant for JL Fields Consulting. She serves on the board of directors of the Woodstock Farm Animal Sanctuary and the advisory board of Our Hen House. Follow JL on Twitter and Facebook.

Episode 121: “I belong to no party and am militant for no one. All my causes, including the most radical, are motivated by the defense of animals.”