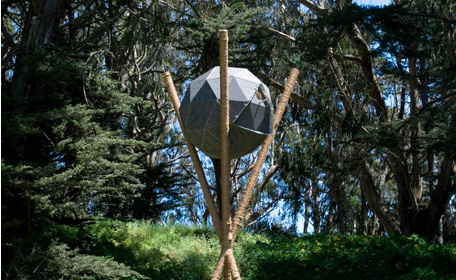 The first site-based exhibit to be organized for a U.S. national park is now on display in San Francisco, and its focus is animal habitats. Entitled Presidio Habitats, the display includes man-made porcelain owls’ nests, a sculpture recreating the flight of a red-tailed hawk (a bird of prey commonly found in San Francisco’s Presidio), and another sculpture that evokes the habitat of a gray fox (North America’s only dog who climbs trees).

Eleven in total, some of the pieces were even made with the animals themselves in mind. Fritz Haeg’s “Animal Estates Snag Tower” was created to provide nesting cavities for the Pygmy Nuthatch and Bumblebee, a cantilevered perch for the Black Phoebe, louvered crevices for the Yuma Myotis bat, cover logs for the California Slender Salamander, and a winter residence for the Coast Garter Snake.

Presidio Habitats — a project of the FOR-SITE Foundation — cost around $900,000 to produce (all through private donors) and will be on display until May 2011. Part of its goal is to highlight the Presidio’s rich biodiversity, while another goal is to woo some escapee animals back to the park.

The exhibit, which opened two weeks ago, has already gained the attention of noteworthy press.

As evident from Presidio Habitats, when art and advocacy become interchangeable, the effect can be profound. Such is the power of art; it can mysteriously work its way in … it can create change and bring awareness to issues that are usually not given much more than a passing glance.