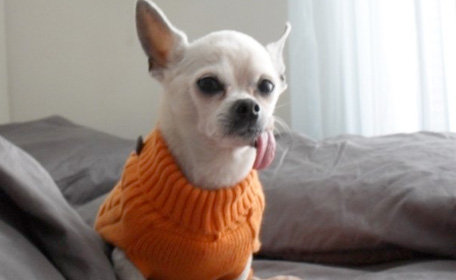 When I was at Adoptapalooza — a massive dog and cat adoption event sponsored by The Mayor’s Alliance for NYC’s Animals — I met Kennedy. Kennedy was a chihuahua that immediately grabbed my heart. Maybe it was his little tongue that flopped out the side of his mouth. Maybe it was that his fur was a little bit longer and scruffier than that of other chihuahuas I’ve met. Maybe it was that, even at just 7 pounds, Kennedy obviously was convinced that he was enormous. Whatever the reason, I just knew he needed to be adopted. And I thought of just the perfect human.

A month later, Jane Velez-Mitchell adopted little Kennedy, and their family (which is also comprised of two other rescued dogs, and a very vibrant 94-year-old lifelong vegetarian mom) was complete. Jane, of course, is a longtime vegan and animal rights activist. I documented the adoption for the Mayor’s Alliance:

Do You Find Social Media Terms Confusing? Yeah, Me Too…