If you get no greater satisfaction than that which comes from braising beets or roasting rutabaga — if you’re hoping that your upcoming birthday, or, perhaps, tonight, the 8th and final night of Hanukah, will bring you that kitchen appliance you’ve so longed for — then perhaps trying on the chef’s hat for size might be just what the career counselor ordered. Not to mention what it could do for the animals, who want nothing more than for you to create delicious, decadent, vegan food.

With vegan restaurants popping up throughout the country (and beyond), prospects for chef jobs are, too. Anyone who is interested in creating cruelty-free cuisine should be developing this delicious skill. Not only will it help you to make a mean vegan roast at your family’s holiday meal (well, a kind one, actually), but perhaps that dream of yours — to turn your savvy knife skills and propensity toward made-from-scratch seitan into a career — is not as far-fetched as you’ve been convincing yourself. 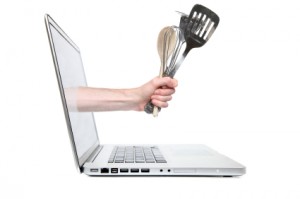 Listen closely… Your computer is telling you to become a vegan chef!

Though you should continue to make it a point to consistently search your nearest Craigslist‘s job openings for the word “vegan” (you’ll be surprised by what comes up) — as well as the resources we told you about yesterday, which frequently list chef jobs — here are three possibilities for talented food-lovers who are interested in extending their skills in a compassionate — and paid — direction:

In perhaps what is the most coveted position for anyone looking to become a vegan chef, bestselling vegan cookbook author, powerhouse Isa Chandra Moskowitz (who was featured on our 100th podcast episode), is not only opening a vegan restaurant in her new hometown of Omaha (!), but is looking for a chef to help execute the seasonal vegan menu. The opportunity to work with Isa is one that most compassionate-minded cooks can only dream of. It could definitely be worth a move to Omaha, which, as Isa discussed when she was on our 100th episode, is way cooler than that shocked look on your face implies. (Incidentally, my two previous associations with Nebraska are the thrifting excursion I took there when I was 16 and performing in a play in Lincoln — I got a really cute vintage jacket — and the mention of Omaha in the incredibly depressing but intensely moving Bette Midler song, “Hello in There.” Though these two already put us at 2 for 2 in Nebraska-positive associations, adding a new Isa-flavored vegan restaurant to the mix is nothing short of a vacation-waiting-to-happen.)

For the Canadians among us, there is also a vegan restaurant in East Vancouver searching for a vegan chef (neat, eh?). One thing that struck me about the posting for this job, in addition to their strong leaning toward the organic, sustainable, and natural health realms, was that the employer specifically asks that those interested in the position include in their application their “motive” (as well as, of course, their “experiences with organic, vegan, and raw foods cuisine”). Though the posting doesn’t explicitly state this, it seems to me that an interest in the ethical and environmental motivations for pursuing this kind of work would only help your chances of getting hired — as long as you can also offer a deep understanding of the healing properties of healthy, vegan food (and, needless to say, talent for cooking). By the way, Vancouver is one of my favorite places on earth, as is evidenced by the journal I kept almost 3 years ago, during my vacation there. I still have dreams of Kitsalano Beach. And with the emergence of new vegan stores like Nice Shoes, you basically can’t go wrong with making British Columbia part of your future.

For those of you in the Chicago area, there is an opening for a cook at a “juice bar/vegetarian restaurant.” The position is part-time (with the possibility of becoming full-time), so it’s perfect for you midwesterners who are still trying to figure out if a future as a vegan chef is your speed. Plus, you’ll almost certainly need something physically-exerting (which being a cook is) to distract you from the blustery cold winters there (ah yes, I remember it well).

I can’t tell you how many times my friends have confided to me their lingering dreams to be a vegan chef. “If only…” they say, the end of their sentence almost always trailing off into another direction, the one that “reality” so frequently squelches.

Maybe 2012 will finish that sentence for you… and maybe you’ll be pleasantly surprised by the outcome. Perhaps you can indeed have your vegan cake and eat it too — after you bake it, of course.

Job Week at Our Hen House: Day 1 — Your Future in Vegan Health?