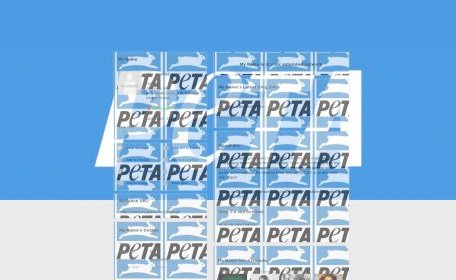 As Job Week here at Our Hen House comes to a close, we want to conclude with an animal rights organization that has perhaps more job openings than the rest of the movement combined. We are, of course, talking about PETA. As we approach our 103rd podcast episode, which airs tomorrow, we are keenly aware that the vast majority of the guests we’ve had on — from Woodstock Farm Animal Sanctuary co-founder Jenny Brown, to Mercy for Animals Executive Director Nathan Runkle, to the Humane Society of the United States’ Senior Director of Farm Animal Protection Paul Shapiro, to Skinny Bitch author Rory Freedman — were all initially reached by PETA. (Seriously, read that sentence again. How flipping fantastic is that?)

There are dozens and dozens of job openings at PETA.

As for me, though it was my friend Marisa Miller Wolfson (of Vegucated) who, 8 years ago, showed me some footage of factory farming, effectively turning my long-time vegetarianism into full-fledged, passionate veganism — it was the subsequent week-long volunteer trip I took to PETA that brought my activism into full-swing.

If you’re in the market for a job in animal rights, there are currently 41 openings with People for the Ethical Treatment of Animals in the U.S. alone. They fit every category you can think of, including administration, media, communications, campaigning, science, and investigations. And the domestic openings span the country — from NYC, to Washington, DC, to Norfolk, VA, to Los Angeles, to even a few telecommuting positions. There are also ample PETA positions overseas, such as in Asia, Australia, India, and the UK.

In browsing around, some of the highlights of these positions included, for me anyway, Media Officers, both in NYC and in DC, a Production Artist in Norfolk, a Celebrity Marketing Coordinator in PETA’s brand-spanking new office in LA, a Translator for PETA Asia, and a Campaign Coordinator in either PETA India or in Japan. There are literally dozens more.

I am, to say the least, in absolute awe of the amount of materials PETA produces, and, as is evidenced by our first paragraph, the amount of  influential changemakers it has created (superstar phenomenon Maggie Q is one of thousands of celebrities who also attributes her animal rights and vegan awakening to PETA). Even though many of them have gone on to have their own spin on their activism and outlook, there is no question as to who was at the root of their awakening.

All of this said, I’ve said it before and I’ll say it again (and again and again): You do not need to work for an animal rights organization, or a vegan restaurant, or a vegan PR firm, in order to create change for animals. Truly, one of the most powerful things you can do for animals is to spread the message of non-violence and compassion in your everyday lives in a way that works for you. That is clearly the essence of what we talk about here in Our Hen House. Changemakers come in all shapes and sizes. We hope that the multimedia tools and resources we offer daily help you to figure out what shape and size you are, and how to plug that into animal activism.

But for those of you whose hearts desire nothing greater than a job in animal rights — I get that. I spent years working for AR organizations, including as the campaigns manager at Farm Sanctuary (by the way, they are also hiring) — a job I held very close to my heart, and a position that allowed my activism to grow by leaps and bounds. And, of course, I am lucky enough to write for my favorite publication on the planet, VegNews Magazine (shameless plug: keep an eye out for my article, “Veganism Saved My Life,” in the February 2012 issue). And, as you can see, I started my own advocacy organization. So if there’s one thing I understand, it’s the unrelenting gnawing at your heartstrings that leaves you no other choice but to pursue a career in vegan advocacy and animal rights. Just know that you don’t have to go down that road to change the world for animals. But if you do, I hope that some of the resources we highlighted this week are helpful to you. And I wish you the best of luck in your search, and a happy, healthy, compassionate, changemaking New Year.

Episode 103: “Activism is the rent I pay for living on this planet.”