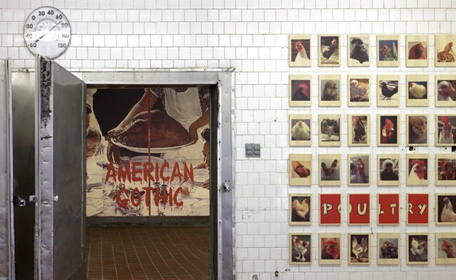 We are excited to announce a new project here at Our Hen House, called Art of the Animal.

Art of the Animal will be an ongoing series where we will feature different artists from all modalities (visual artists, musicians, photographers, etc.) who are speaking up for animals through their artform.

To launch our series, we bring you visual artist Jonathan Horowtiz, whose new exhibition, Go Vegan, is currently making people slightly nauseous at Gavin Brown’s enterprise (and I mean that in a good way). The exhibition is being held at a former meat-packing plant, La Frieda Meats, and it is a harrowing multi-media exhibit that includes a portrait gallery of more than 200 celebrity vegetarians, a video installation featuring Paul and Linda McCartney, and footage of animal slaughter. According to the press release, “By turns violent and comical, the project is a vivid, engaging and forthright attack on complacency.”

I caught up with Jonathan at his opening yesterday and talked to him about art, politics, and what it means to him to Go Vegan.

Jonathan Horowitz: Art of the Animal from jasmin singer on Vimeo.

Episode 18 of the Our Hen House TV Show is Now Viewable...