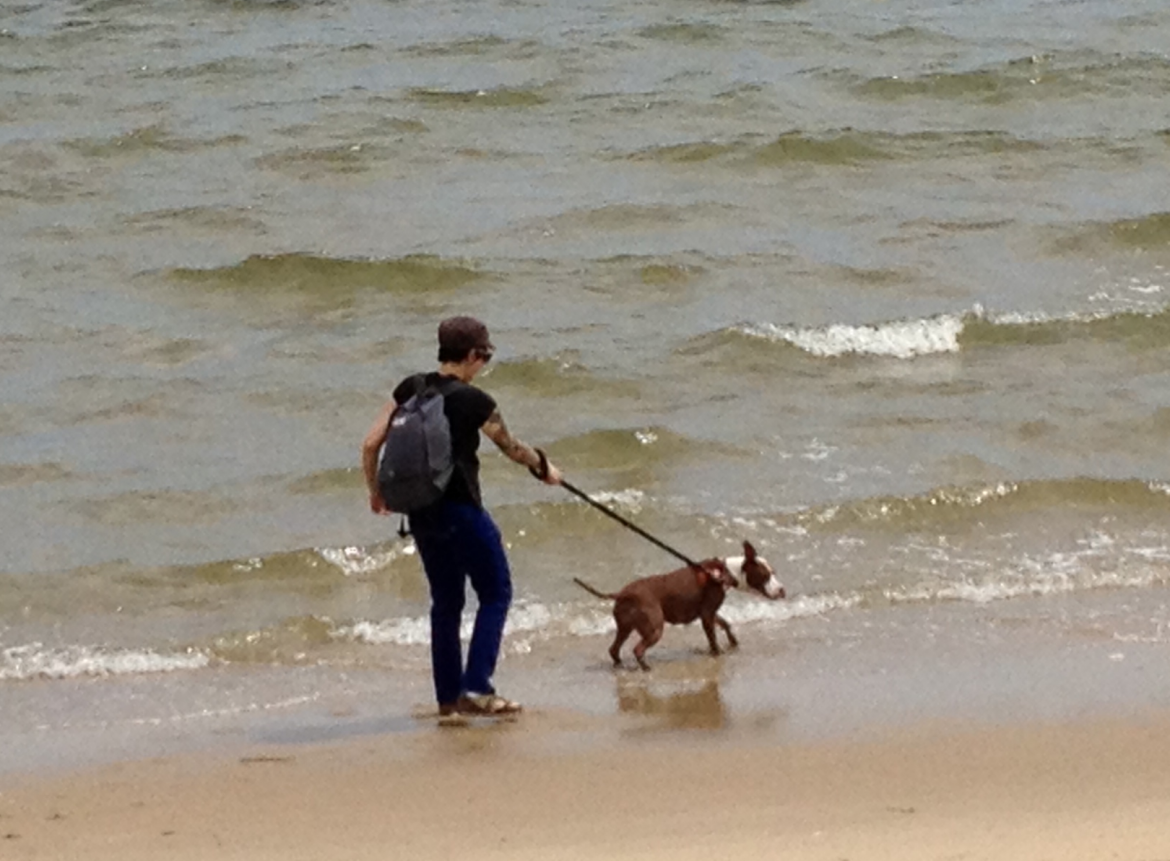 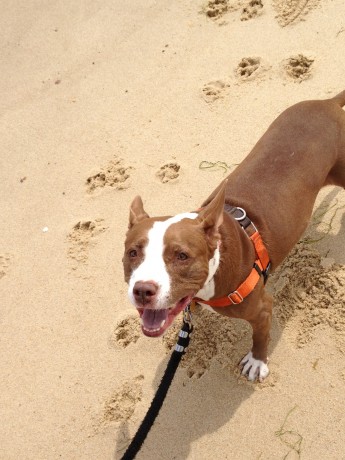 This is Rose, the other day, enjoying the beach.

I admit, I’m one of those dog parents. The kind who makes up songs about their pooch on a daily — no, hourly — basis, and sings them in falsetto to my sweet pit bull, Rose. Though the panache I bring to my melodies would certainly be enough to fill Carnegie Hall, I’m afraid that my inability to find my key would just as quickly empty it. For now, I’ll stick to private concerts — just me and Rose, and Mariann, if she’s (un)lucky enough to be nearby.
Since music is something that makes my heart sing, I’m bursting at the seams about the new song, “Breed Specific Legislation … Sucks” by Vegan Smythe, who, according to his Facebook page, makes “Earth-friendly songs and comedy.” Comedy? He’s throwing humor into the mix, too? Talk about a bold move! This guy is doing something more of us should do: he’s taking a social injustice and turning it into a catchy melody. Makes you want to learn how to use that video function on your phone, eh? In the mean time, while you’re figuring that out, the least you can do is share this video.

There should be more songs about pit bulls! These darling canines are so inappropriately maligned. Surely that alone could fill up a Blues record — perhaps a box set. As we lament so frequently here in Our Hen House, so many pit bull type dogs (like our Rose) are nothing short of gentle and gregarious, like a lap cat stuck in an adorable stout body.
Some of my favorite moments with Rose are observing when she spends time with my 3-year-old niece, who is worlds more interested in hanging out with “Rose the Dog” than with her Auntie Jazz. Tragically, the town where my niece lives has a strict ban on pit bull type dogs. If my niece were old enough to understand such inane inequalities, she’d no doubt be as perplexed and outraged as I am. But then again, I’m old enough to understand that humans can carelessly oppress other individuals — like pit bulls, to name just one group — and, like my niece, I don’t get it. So let’s actually follow my niece’s sage solution for when things are getting her down, and let’s sing about it!
Wait, stop. Let me clarify: When I proclaim that more music should bring awareness to their plight, I’m not saying that music in and of itself will solve this dilemma. Nor am I trying to diminish this Herculean issue which, at its root, is full of little else than ignorance. A song will not fix this, not by itself. And we have indeed reported on the plight of pit bulls time and time again — and have highlighted the work of groups and people working on their behalf. Just like the fight to end the exploitation of all animals, working to change the world for pit bulls requires a multi-pronged approach, and you already know what a big fan I am of using the arts as one tool to move the message. Even very recently, we highlighted an incredibly talented visual artist devoted to speaking up for pit bulls, and that makes my canine-loving heart sing.
As does this song from Vegan Smythe. Way to speak up for all animals! You’ve got a new fan in me — and in my little niece.
Share 0 FacebookTwitterPinterestEmail
previous post