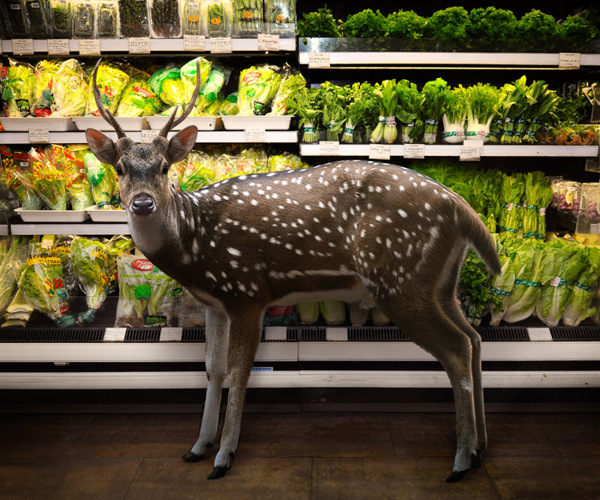 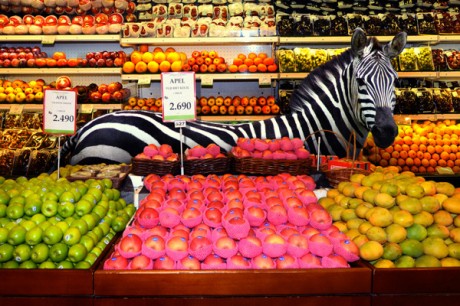 from “Garden Fresh” by Agan Harahap

When I first saw this, I was honestly not sure what to make of it. In fact, I’m still not. My first question was whether or not the animals portrayed in “Garden Fresh” — the new digital arts project for Trax Magazine, by Indonesian-based Agan Harahap — were real live animals used as models, or even victims of taxidermy. My layman eyes and lack of artistic inclination or prowess would not divulge, and so I ran the pieces by a few art historians and artists I know. The unanimous opinion among these pros was that the project was indeed photoshopped. (Of course, that still does not solve the potential ethical quandary of whether or not the photos they were photoshopped from were ethically sourced, but moving on…).
The images used in “Garden Fresh” carry a hefty mission:

Garden Fresh series investigates the shifting boundaries between humans and animals in today’s environment and the complex relationship between art and nature. It is like a fable about a journey undertaken by the animals when they venture into our daily lives. The animals are confronted by a new reality that is in conﬂict with their natural habits and habitats. At the same time, when we see these ‘zoo-trapped’ animals in supermarkets, their most outstanding characteristics are isolated as their ‘only’ characteristics. The animals are stripped of their own identities and are used as empty vessels to be ﬁlled with the human drama of parody, satire and allegory. We cannot help but see animals from a human vantage point, and therefore in some sense all the works in the present exhibition are actually about us.

Seeing animals solely from a human vantage point seems to be the basic (and enormous) problem within our society, the mindset that so many of us animal activists are fighting. The refusal to not only try to see things from the perspective of the oppressed, subjugated, and marginalized animal — or, more broadly speaking, even recognizing that said-animal has a perspective at all — is what allows animal exploitation to continue, and to thrive. It allows one to rationalize doing anything to animals for human gain, pretty much. It’s at the core of speciesism. And “Garden Fresh” takes that mentality, turns it on its head, and forces the viewer to wake up, even if for just a moment.

from “Garden Fresh” by Agan Harahap

Yet at the same time, something about these images makes me uncomfortable. While that may be the point, it somehow feels like a bigger point is being missed. Yes, it’s cool to see a fuzzy bunny hanging out in the lettuce, or a zebra chilling by the apples, but these pieces don’t really grapple with the very real cow carcass being forced to “hang out” with his murdered siblings over in the meat counter.
I’ve often fantasized about holding a mock-funeral in the deli-meat area of a busy store, flash mob style. Would that kind of theatrical display force people to confront the truth about who their dinner was? Will “Garden Fresh” accomplish that? Will the lack of farmed animals present in the images that this online exhibit displays hinder or help it’s effectiveness in connecting the dots between animals and exploitation? Is that even the point the artist is going for?
Sigh…
I suppose it’s not up to me, or to you really. That’s both the joy and frustration of art. At least when you bring animals into the equation (in an ethical, non-commodified way), there’s always the possibility of inspiring change, or at least provoking thought, in a mysterious otherworldly way that only good art can accomplish.
Share 0 FacebookTwitterPinterestEmail
previous post