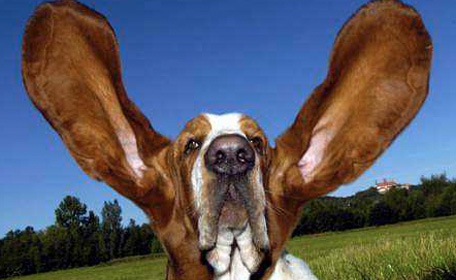 We all know that feeling; the one when you get asked, “where do you get your protein?” or “what if you were on a desert island?” and you contemplate your response. We suspect this is still a prevalent feeling among vegans, and that’s why we’re re-publishing this article on how to respond to those questions and more: listen.
This article originally appeared on Our Hen House on July 29, 2010. If you’d like to see a certain OHH article resurrected, email us at info [at] ourhenhouse [dot] org.
***
I have recently been reminded of how the art of listening has become antiquated somehow. I’ve found myself in too many situations where I either caught myself not listening, or I was blatantly not being listened to.
As vegans, we have probably all been faced with a moment where we challenged ourselves to question the status quo and look deeper. At some point early on, we watched footage of factory farming, or we read a book about veganism, or we were influenced by a celebrity or friend. We listened to what they had to say, and we realized there was no other way to live in line with our ethical beliefs than to go vegan. Maybe there were no doubts or hesitations.  Or maybe we worked through them all by ourselves. Or maybe someone actually listened to our doubts and helped us through them.
I won’t lie: Throughout the past seven years [EDITOR’S NOTE: Now ten years] of being an animal activist, there have been times when I’ve found it trying to have the same damn conversation again and again with the same person who justifies their meat-eating with ridiculous fallacies. But it is these moments precisely when it is most urgent for us to be effective communicators. And, with the exception of dealing with people who are treating us abusively and without respect, these are the moments when it’s more important than ever to listen. Effective communication simply cannot exist unless it starts with open-hearted and conscientious listening.
Oh yes. It is so easy to just jump over what the other person is saying because you’re sure you know what they’re going to say next. You’ve heard it before. So let’s just skip the drivel about them “just loving meat” or “needing protein” or “caring about humans more than animals” and get right into our talking points that we’ve memorized so astutely. Come on, admit it. We’ve all been the interrupter at one time or another. After all, there is no time to waste in a world eager to ignore us.
If you’re lucky, at the beginning of your vegan journey, someone took the time to actually hear your concerns, your excitement, your hesitance, your passion, your pain, and even your resistance and denial. And probably, there is someone else out there now — a budding vegan — who needs the good luck of finding you, ready and willing to extend your own hand. And believe me, I am not absolving myself. Communication is something which I constantly have to check with myself. Am I becoming an automaton? Step back, Jasmin… Listen to what Potential Vegan is saying and then respond thoughtfully. You might actually learn something you didn’t know about the obstacles people face, or think they face, in opening their hearts to animals.
And, if I may: That kind of listening and patience needs — it neeeeeeeeds — to also extend to our peers. It’s got to, or we’re going to waste such valuable time and energy coming to assumptions about this person’s tactics or that person’s ideals, and the ones who will truly suffer will be the the ones who we’re (all!) trying to save. This is not to say we can’t or won’t ever disagree — but let’s try to do it only after we have made a sincere effort to actually understand the nuances of the other person’s position and where we agree and where we differ.
I realize that this blog entry is slightly off the beaten path from our usual entries, but since listening is obviously key to effective communication and therefore activism, I felt justified going there. Thanks for listening.