When lawyers ask me how to get started in animal rights, one of things I tell them is to consider joining their local or state bar association and either joining, or founding, an animal law committee. Or, they can join the American Bar Association’s TIPS Animal Law Committee, which I used to chair. My local bar association, the New York City Bar Association, was the first in the country to have an Animal Law Committee, and when I joined it — years ago — it was really the start of my animal advocacy. I cared about what was happening to animals before that, but getting together with like-minded lawyers was a huge push for me to actually try to do something about what was happening to animals. Eventually, I also became chair of that committee, and it was a terrific experience.
But there’s no question that the standard bar association isn’t everyone’s cup of tea. They tend to be pretty mainstream organizations, filled with mainstream lawyers, talking about mainstream legal issues. I myself often feel a bit out of place at bar associations — as if I’m pretending to be a bit more like everyone else than I really am (for better or worse). In particular, people on the left end of the political spectrum may feel a bit stifled in organizations that can often be dominated by corporate types. That’s one reason I’m so glad to hear that the National Lawyers Guild, a national association of lawyers who come at social justice and anti-oppression issues from the point of view “that human rights shall be regarded as more sacred than property interests” has formed an Animal Rights Activism Committee that is working “to end oppression and exploitation of non-human animals.” 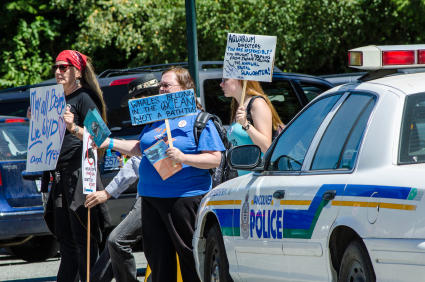 Animal Rights Activists Need Lawyers on Their SIde

What makes this doubly exciting to me is that, back in the day, there seemed to be a surprising lack of interest  from the American left for animal rights issues, a state of affairs that perplexed animal rights activists for years. Just one example — the American Civil Liberties Union has been held partially responsible for the passage of the Animal Enterprise Terrorism Act for its failure to oppose, in fact, it’s tacit approval of the language of the bill when it was first proposed. Apparently, though, a shift has occurred, and the folks at traditionally progressive organizations are more and more interested in what’s happening to animals, or at least in what’s happening to the people who advocate for them. We’ve even been told that the ACLU itself has taken the position that AETA should be declared unconstitutional. That’s great news.
And even greater news is the proactive stance that the National Lawyers Guild Committee has been taking toward animal issues. Since its inception, it has reportedly:

Organized a workshop for the 2013 NLG Convention, “Defending Terrorism,” which will explore connections between different communities targeted as “terrorists”;
Submitted a public comment to the National Institutes of Health urging it to follow through on plans to retire chimpanzees used in research;
Compiled a brief bank of filings in animal law cases and defense work on behalf of animal rights activists;
Made the NLG Southern Region regional conference a completely vegetarian event;
Presented on “Animal Enterprise Terrorism and the Criminalization of a Movement” at a Climate Change Justice conference;
Published an op-ed about ag-gag legislation on CommonDreams.org

If you are interested in getting involved with the NLG committee, and you are in New York, you might want to check out their upcoming event on October 3. In fact, even if you’re not a lawyer, you may want to be there. Speaking will be Lauren Gazzola, one of the SHAC 7, who will be discussing the repression of animal rights and environmental activists as part of the Green Scare, and Bina Ahmad (who you might remember from Episode 115 of the Our Hen House podcast), who will be discussing the connections between animal rights and broader visions of justice. If you’re not in New York, or can’t make the program, you can find out more about the committee by emailing them at animalrights [at] nlg.org.