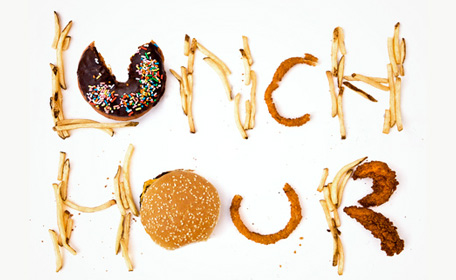 We first told you about the documentary, Lunch Hour, back in 2010. At the time, the film — which focuses on the ugly underbelly of the national school lunch program — was mostly just buzz (“Did you hear that activist James Costa is making a film exposing the horrors of school food?!”). But now, at long last, it’s making the festival and conference circuit. So get out your tissues and your tofu, because that means we can finally see it.

Lunch Hour — which features the likes of Rachel Ray, Robin Quivers, and Alexandra Jamieson (who was a guest on our podcast way, way back on Episode 10) — examines whether the American National School Lunch Program is the root of the childhood obesity crisis (howzabout “yes!”). It then offers a refreshing solution, speaking with politicians, celebrities, chefs, and doctors who are working hard to fight the systemic poison that is seeping into our schools and our kids. Not surprisingly, Lunch Hour demonstrates the power of a plant-based diet, and features the work of one of our favorite organizations, New York Coalition for Healthy School Food, which has been working hard to introduce vegan foods and nutrition education into the school community here in NYC.
Luckily, for those of us here in The Big Apple, the first New York public screening of Lunch Hour is coming up on June 16, to be featured at The Seed: A Vegan Experience. The film will show at 2:30, and following the screening, there will be a Q&A with the director, the passionate and talented James Costa.
And since we’re on the subject of The Seed, be sure to get there early that day, because Mariann and I are giving a talk called “Think Vegan: 10 Tips to Get You Started” at noon. The entire weekend is bound to be game changing. If you want to attend (which, trust me, you want to attend), you can get 10% off of your ticket price by entering the code “ourhenhouse” when you check out. And if you tune in to our podcast this weekend, we’ll not only be speaking with champion ultramarathoner Scott Jurek (The Seed will also feature some amazing vegan athletes, like Brendan Brazier and Rich Roll), but we’ll also be giving away 5 tickets! So if you missed our last giveaway, you have one more chance. That means you need to tune in.
After Vegucated was released (remember when filmmaker Marisa Miller Wolfson graced our podcast with her presence?), we had a feeling that documentaries surrounding veganism and its many linked issues would take a turn for the better (they were slim pickins, pre-Vegucated). There are no other films quite like Lunch Hour — a movie that doubles as both art and activism, spreading the word about the horrors of school food, while offering compassionate, healthful, plant-based alternatives. If we want to foster a next generation of healthy and happy people — people who, I hope, will manage to save this threatened world from further environmental and compassion collapse — we need to take responsibility, and action. Lunch Hour is a perfect place to start.

Run with Scott Jurek Tomorrow in NYC, and Read “Eat and Run” (ALSO Listen to Him On Our Podcast THIS WEEKEND!)

Changing the World Through Art and Stats: 2 Blogs You Need to Read

Nominate the OHH Podcast in the People’s Podcast Awards!

An Introduction to Animals and the Law