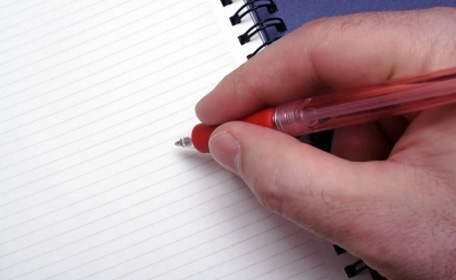 Jenna McDavid is one of my favorite people on the planet. In addition to having a truly beautiful and ethical soul, Jenna is an activist like no other. When it comes to her advocacy, she is positive, wise, and innovative. When I heard about the Vegan Pen Pals Project — Jenna’s latest and greatest creation — I plotzed. This is brilliance at work, and will undoubtedly foster new vegans worldwide. It’s also easy and fun — which hopefully you can get behind. Luckily, Jenna agreed to tell you all about this important new tool for vegans and activists everywhere. Joining us today as our Visiting Animal is the one and only Jenna McDavid.

Is there anything cooler than receiving a hand-written letter in the mail? I’m the opposite of a pack rat, but I still have a folder full of letters and cards I’ve received over the last twenty years, and on more than a few occasions I’ve sat in the middle of my living room and pored over them when I was feeling sad/nostalgic/happy/homesick/excited/you get the idea.

In that spirit, we at L.O.V.E. [Living Opposed to Violence and Exploitation] have recently launched the Vegan Pen Pals Project, a worldwide community-building effort that connects vegans around the globe through the magic of the mail system. In a world that can sometimes be challenging for a vegan, we thought it would be really nice to make these one-on-one connections with tangible reminders that we are not alone, that we are loved and supported, and that we are making a more peaceful world, one letter at a time.

As one of the co-founders of L.O.V.E. I have always been really committed to building community and fostering local activism. While our collective only exists in a virtual space on the internet, the people who comprise the collective are operating in a very real world. In addition to the blog and other online elements of our site, we’ve also definitely tried to make off-line activism accessible for all: we provide free literature for distribution, we have a video (You Can Help Stop This) that can be downloaded and shared, we have how-to directions for letter writing and video projection, and now we’re hoping to build even more connections through the Pen Pals Project.

The premise is simple: you answer some questions about yourself on an online application, we review and pair you up with another vegan (or aspiring vegan) based on your similar interests, and once a month or more you send them a letter via a central PO Box. You never have to give your address to anyone but the Pen Pals Project moderator (oh, that’s me) who promises not to share it with anybody. Creative types are encouraged to send mixtapes, stickers, artwork, photographs, zines — whatever might be of interest to your vegan pen pal.

Maybe you just adopted a vegan diet and are having trouble finding new recipes. Maybe you’re an aspiring vegan who just needs that little push from someone who’s been there to get you over the edge. Maybe you want more ideas for activism and would like to know what other folks are doing in their communities. Maybe you’re a long-time vegan and social justice activist who is looking for a compassionate friend to listen to your gripes about the people who just don’t get it. All of these are great reasons for signing up to be a Vegan Pen Pal, and we’re hoping that this project will grow and expand and create some really strong friendships for vegans around the world.

Interested?  Check out the Vegan Pen Pals Project at loveallbeings.org and sign up today!  We expect to begin pairing people after January 1, 2011. If you have any questions, you can write to me at jenna[at]loveallbeings.org. 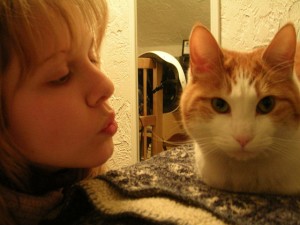 Jenna McDavid is a Harlem-based queer vegan activist with a love for riding bikes, chalking on the sidewalk, and writing letters. She went vegan in high school and is still trying valiantly to convince her family that it’s not “just a phase.” In 2008, Jenna co-founded the LOVE Collective (Living Opposed to Violence and Exploitation), where she writes regularly and manages several projects designed to foster community and end oppression. When not blogging or shirking responsibilities at work, you can find Jenna playing cards in the West Village, training for roller derby, singing karaoke (poorly), or up to her elbows in cupcake batter. Her two cats, Hamlet and Ophelia, have more Facebook friends than she does.

“There is no reason for any animal to die for the sake of dance.”