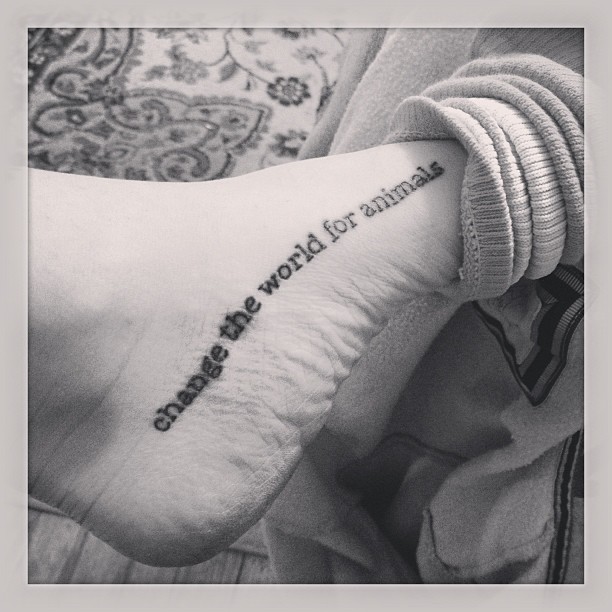 Mariann Gets Even Older (and Wiser?): Donate to Mariann’s Birthday Wish for Our Hen House! My birthday is on April 6. And my birthday wish is to raise $5,000 for Our Hen House. As my foot says, I want to change the world for animals. I believe Our Hen House’s mission to mainstream the movement to end the exploitation of animals can help accomplish that. I would be deeply appreciative if you would donate to my birthday fundraiser. Please read on…

It’s been an absolutely incredible year for me, and also an incredible one for Our Hen House, which is absolutely because of your generosity, support, and enthusiasm for changing the world for animals. Since I last had a birthday, here are a few of the things that went on both with Our Hen House and with Jasmin and me personally:

As you can see, I’m keeping busy, but I’m loving every second of it (though there aren’t enough seconds in the day). And this year we hope to expand OHH even more, because we are trying to mainstream the movement to end the exploitation of animals, and that is no small feat. We have some very creative projects up our sleeve which will incorporate the arts even more into our advocacy efforts, and we are aiming to greatly expand the listenership of our show into the mainstream. Each week our guests get better and better, and I am given more and more hope that the change we are seeking is indeed attainable.

So I hope you’ll help support our efforts and make a donation to Our Hen House. My birthday is on April 6, and there is nothing in the world I want more than to have Our Hen House grow, so that it can reach more people and, indeed, change the world for animals.

Thank you in advance for anything you can give. You inspire me.