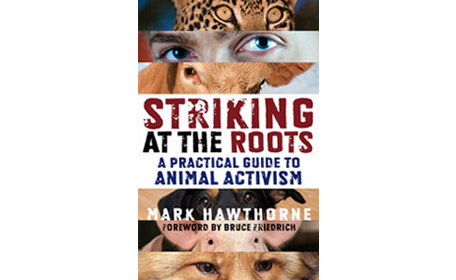 I am frequently asked, and the subject frequently arises within AR circles, whether or not graphic imagery within advocacy helps or hinders the cause — both in terms of still photos and video. I am guessing that you already have a strong opinion of the matter, and I’d also imagine that your opinions are split down the middle.
Activist Mark Hawthorne, the mastermind behind the brilliant advocacy manifesto Striking at the Roots — as well as the prolific blog by the same name — has thoughtfully and carefully broached this subject in his recent must-read article, “How Do Graphic Images Affect Animal Advocacy?” Mark begins by recounting an image he came across years ago — one that refuses to leave his mind’s eye — which “showed the bloody bodies of dozens of freshly skinned seals scattered across the frozen landscape.” In the corner of the image, Mark explains, was a lone seal who had managed to get out.
Even just hearing about this scene makes me nauseous, hopeful, and, ultimately, even more ready to do my part to change the world for animals. All this from simply reading the description of a photo that Mark saw many years ago. Imagine the impact had I actually seen the photo myself…
Mark actually quoted me in his article, which made me feel like a rock star — or like crawling under a rock — I’m not sure which. That’s because I’m such a fan of his level-headed, rational, accessible, and motivating tips for activists, and I’m gobsmacked that he thought of me in the first place. I’ve been quoting from his book, and recommending it, ever since it was published. Mark’s presentation of this contentious question — whether or not graphic images result in changing the world for animals — was set forth with clarity and insight, which he gleaned from a mixture of his own take as well as those working in animal rights. He also shed light on two new, important studies which scrutinize the impact of such imagery — “The Effects of Graphic Images On Attitudes Toward Animal Rights,” conducted by the AR group, FARM; and a “Video Comparison Study,” which was organized by the Humane Research Council, subtitled “Youth Response to Four Vegetarian/Vegan Outreach Videos.”
Weighing the thoughts of the activists whom Mark consulted for his piece — including Nathan Runkle, lauren Ornelas, and Karen Davis — it is clear that there is no one right way to go about animal advocacy, something I think it is important to bear in mind.
Here’s one particularly poignant section, which quotes Nathan Runkle:

The last word on images has yet to be uttered — and likely never will. We can count on further discussion and more studies as the movement hones its methods and message. But for the moment, grim depictions, particularly scenes from undercover videos, seem to hold sway. Adds Nathan: “As I said before, no consumer will tell you they want to see graphic images, but the fact remains that they are undoubtedly effective in changing attitudes and behaviors. Graphic images, which are hard to ignore and impossible to forget, create an emotional connection to the issue and raise ethical discussions, and these things impact consumer behavior.”

I strongly recommend taking the time to read this article in full, and to familiarize yourself with the accompanying studies. As animal activists, it’s so dire that we not only focus on the why, but also continue to hone our communication skills and techniques, and constantly evaluate case studies that will support our changemaking efforts.
While you’re at it, pick up a copy of Striking at the Roots. (You’re welcome.) 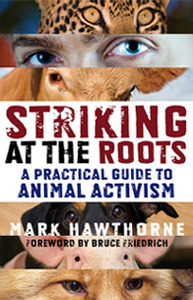