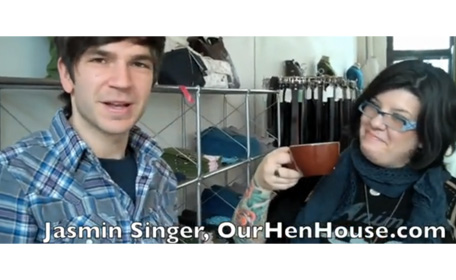 Jordana Reim of Planet Verge has put together a video series called “Going Vegan.” In it, she challenged The Lives of Famous Men drummer, Dylan Mandel, to go vegan for one month and document his journey on the internet, for all to see.

So what sparked Dylan to try veganism? He’d always admired the lifestyle and knew that factory farming was a major cause of environmental degradation, but it wasn’t until he met Planet Verge host Jordana Reim that he decided he was ready for the change. “It seemed really interesting and I think I was too comfortable in my lifestyle and ready to try something different when Jordana asked if I would try cutting out animal products. Talking with her made me realize that you don’t really know what you’re eating when you eat meat and I wanted to learn more about what I was putting into my body.”

Jordana is a perfect example of an activist taking her skills (video production) and interests (music) and blending them into something that ultimately creates change for animals. For the non-vegan who happens upon this documentary series, even just taking one look at cutie-pie Dylan Mandel will make them ditch the meat and dairy. Aside from looks, the journey that Dylan takes alongside Jordana is profound. The videos are short enough for you to watch in between reading Facebook updates, but they also pack a punch.

Planet Verge has also managed to get some top sponsors for “Going Vegan,” including PETA2 and Vegan Essentials.

In Episode 2, “Taking the Alternative,” Dylan gets some advice from yours truly about the potential hurdles and delicious cuisines that come with making the transition to veganism.