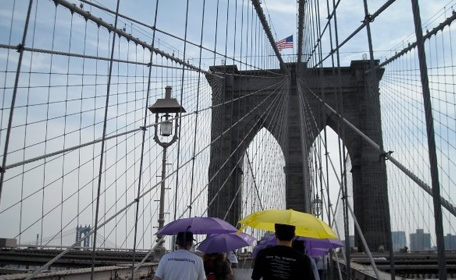 This past June, we told you about Mercy for Animals‘ (then) upcoming involvement with the NYC Gay Pride Parade. The animal rights group marched with a banner that read, “No One is Free While Others are Oppressed.” In addition to the love affair that I’m having in my head with MFA for their provocative undercover investigations and their ability to generate mainstream media as quickly as I generate a cup of coffee, MFA has long worked to bridge the connection between animal rights and gay rights. Their current project to that end is the upcoming NYC Wedding March (a.k.a. Marriage Equality of NY march) across the Brooklyn Bridge, where they are asking all animal-loving marchers to wear their MFA t-shirts (if you don’t have one, they’ll provide one for you) and march behind their “No One is Free…” banner. If you’re in NYC, you can find out more information about the event on MeetUp. 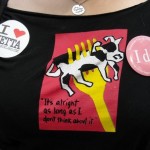 A few years ago, I had a similar idea. My friend, Marisa and I took part in that same march and wore our favorite vegan t-shirts. Of course, there were only us two — hardly the scene MFA will make with their flurry of gay rights and animal rights advocates, but still. It’s a nice reminder that when you’re speaking up for other social justice movements in any capacity, you can always try to work in the animal theme somehow. You can do this through veganizing the food at the event (if that’s in your control), handing out vegan-themed leaflets when possible, and, at the very least, wearing vegan messagewear.