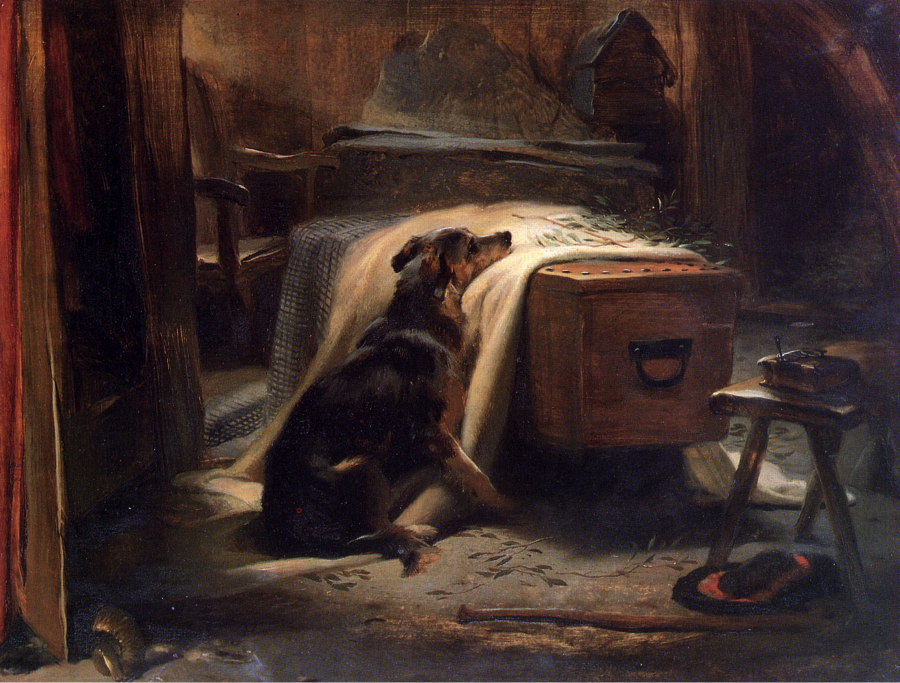 More than a Painting: The Old Shepherd’s Chief Mourner and the Seeds of Early Animal Advocacy

Whenever I am in London I make a trip over to the Victoria and Albert Museum (V&A) in South Kensington to see Sir Edwin Landseer’s 1837 painting, The Old Shepherd’s Chief Mourner. It is a funny thing, really, this need I have to go and stand in front of this painting time and time again. This is a painting I am very familiar with, one I’ve studied, taught, and read about many times. There are countless reproductions in books, online, and in print format. I know what to expect, in other words, and yet each time I stand in front of the image I am surprised by my reaction to it. This painting connects me to my work on the early history of visual culture in animal advocacy, and grounds me in a way that few other images do.
The Old Shepherd’s Chief Mourner hangs in the darkened and crowded hallways of one of the British galleries at the V&A. It would be easy to miss if you were not looking for it. The protective glass of the painting’s frame actually makes it difficult to see the details in this image – I get a clearer view when I look at a reproduction on my computer. And yet, I don’t miss an opportunity to go and stand in front of it.
John Ruskin, one of the most famous art critics of Landseer’s day, praised this painting, describing it as “one of the most perfect … pictures … which modern times have seen.” The gallery label accompanying this picture at the V&A tells viewers:

This scene of the sentimental devotion of a dog won praise and popularity for its famous artist, Edwin Landseer. The animals he painted display human feelings and characteristics. One of the important aims of British art of the day was to illustrate sentiment and affection in paintings.

While this accompanying label is factually accurate, it also omits a large portion of the story, namely that this painting became an important part of animal advocacy campaigns in the 19th century. For example, in March 1881, it was reproduced on the pages of Our Dumb Animals, the publication of the Massachusetts Society for the Prevention of Cruelty to Animals (MSPCA), and declared to be “eminently appropriate” for this publication.
The current gallery label points out that the animals Landseer painted “display human feelings and characteristics.” However, in the late 19th century, the MSPCA and other advocates took it a step further and saw this painting as an important way to underscore the fact that both human and non-human animals experienced similar emotions. In other words, this painting was not simply a visual symbol for human emotions and experiences. It was, at least for some viewers, a reminder of the shared experiences between human and non-human animals. This dog mourns the loss of a close companion, something many viewers of this painting would have experienced. Furthermore, this painting also highlights the strong emotional bonds that can exist between human and non-human animals. For an organization like the MSPCA, then, this kind of image was an important part of its advocacy efforts.
The central figure in this painting is a dog who rests his head on the simple wooden coffin containing the body of his human companion, the “old shepherd” of the painting’s title. That this dog refuses to leave this man’s side – even after death – highlights the close relationship that these two had. Ruskin and others have pointed to the simple, rustic furnishings in the room where this scene takes place, underscoring the character of the man who once lived there. Again, this is all true – the bible on the stool points to piety, for example – however, it is the relationship between man and dog that became the focal point for so many viewers of this picture, including animal advocacy groups like the MSPCA.
When I look at this painting, then, I can’t help but think of this history. It was a popular painting, and many prints were made of it during the 19th century. I often wonder about the reasons that would motivate people to purchase a print of this painting and hang it in their home. Undoubtedly the cachet of having a copy of a famous painting by a famous artist played a role here (similar to the way we might purchase a poster or postcard of our favorite works of art today); however, given the ways in which animal advocacy groups embraced this image, I think there was more to it than straightforward artistic adoration.
When I look at The Old Shepherd’s Chief Mourner I feel strongly connected to the reformers and advocates from previous generations who understood the impact that art and visual culture could have in the very complex discussions about the ways in which non-human animals should be treated in our society, people who have paved the way for activists today. This painting and, indeed, most of Landseer’s other paintings are not taken that seriously by art historians and critics today. As the V&A gallery label indicates, this image is often read as an example of Victorian sentimentality, a throwback to “olden days” when life was somehow different from ours. However, it is important to take another look at this painting, to remember the place this image held in the minds of those involved with early animal advocacy campaigns. As is the case today, those wanting to change the world for animals relied heavily on visual imagery, and Landseer’s work was especially popular in this context. This image may have more in common with our current activist efforts than we recognize at first glance.