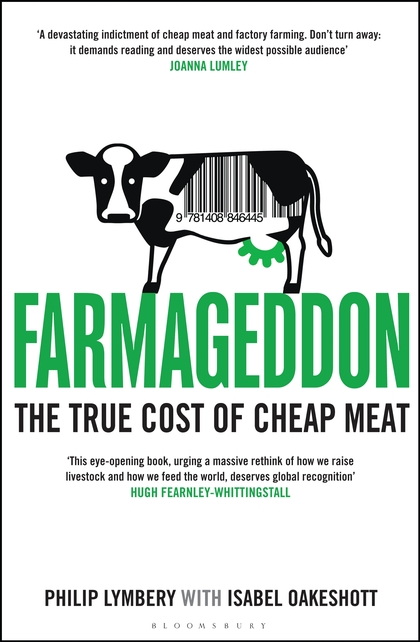 Today we welcome writer Emma Silvethorn to Our Hen House, to share her insights on the new book, Farmageddon: The True Cost of Cheap Meat.
***
My Thoughts On Farmageddon
by Emma Silverthorn 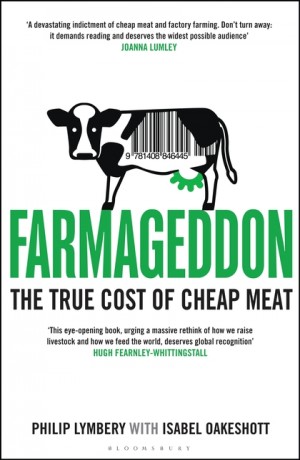 Farmageddon: The True Cost of Cheap Meat by Philip Lymbery with Isabel Oakeshott

I have to offer a few caveats at the start of this discussion of the recently released book, Farmageddon: The True Cost of Cheap Meat (Bloomsbury, April 1, 2014). First, one of the authors, Philip Lymberry – the CEO of charity Compassion in World Farming – is my uncle through marriage. Second, the book is dedicated to my grandparents, Peter and Anna Roberts, the founders of CIWF. Finally, in accord with the mission of that organization, this book does not promote veganism or even vegetarianism. Rather, it exposes and details the pitfalls of intensive farming, focusing on animal cruelty, human health, and environmental impact. As a result, many vegan animal rights advocates might rightfully argue that the conclusions of this book are, at best, a half-measure.
However, I hope that they will not disregard Farmageddon entirely because of that, since I think the information in this book would be of enormous value to anyone who is fighting for farmed animals. Indeed, we should all take note of the fact that this book is having a substantial impact, at least in the UK, where I am based. The book has been featured in almost all of the national papers across the political spectrum left to right, from The Daily Mail to The Guardian, as well as on the BBC’s Meet the Author and Radio 4. Clearly, Farmageddon has hit a nerve.
The information in this book (which is co-authored by Isabel Oakeshott), along with the important insights offered by Kim Stallwood in his latest book, Growl, have convinced me that, regardless of what people believe is the appropriate and truly sustainable alternative, I will see the collapse of the cruel and unsustainable system that is factory farming in my lifetime. Even just glancing at the title, Farmageddon, which as one reads the book will come to appear spot on – rather than hyperbolic or sensationalist – makes one realize that there is a convincing case that factory farms seem to be imploding of their own accord. Aside from outside pressures from animal rights campaigners, environmentalists, and the health-conscious, the numbers of industry insiders deciding to turn their back on intensive farming is growing. As is illustrated in this book, not only are individuals making the personal choice to leave their jobs on such farms based on ethical grounds, but many are also are also speaking out against the cruelties and absurdity of these intensive practices – having witnessed them first-hand.
As one example, the chapter “Animal Care, What Happened to the Vet?” details “the dark side of the veterinary profession… rarely seen by those outside the industry.” It reveals how factory farm veterinarians, rather than ensuring animal welfare standards are met, do little more than “keep herds alive,” with the animals being considered “production units” (or, when in ill health, “faulty machines”). Further, the revelations from ex-factory farm vet Jean-Claude Latife truly tell a story that’s a far cry from the popular image of the wholesome professional who cares for our cats, dogs, and bunnies.
Even having grown up in a family of vegetarians and animal welfare advocates, reading Farmageddon was still both a shocking and enlightening experience. One of the most surprising factors for me was the multiplicity of negative effects of so many of these intensive methods of production. For example, I learned about the horrific practice of trawling Peruvian oceans for anchovies, in order to grind them up into meal for American and European farms thousands of miles away – a practice that drastically depletes marine and sea-bird life populations in Peru, as well as poisons many of the locals who live near Chimbote Bay, where the majority of polluting fish farms are located.
I’m vegan, first and foremost, for compassionate reasons – though, of course, I’m also aware of both the health benefits as well as the environmental advantages of my diet. Yet, what affects me most on a visceral level, is the understanding of the enormous suffering that is implicit in using animals for food. Farmageddon provides many reasons for understanding that the scope of the compassion that’s served by veganism is even wider than many may realize, because the book so effectively highlights the many human lives that are negatively affected by intensive animal agriculture.
As one example, the book details the rarely mentioned but ongoing health threats to those living in the town of La Gloria, Mexico – home to the last Swine Flu epidemic, and an area still saturated with intensive pig farms. Aside from the residents’ vulnerability to fall victim to some of the more extreme epidemics, like Swine and Avian Flu, ill health (especially respiratory diseases) is common for those living or working near factory farms across the world. Moreover, as illustrated in Farmageddon, as well as in Eric Schlosser’s Fast Food Nation, a high proportion of those employed in these farms are immigrant workers living in poverty, often with little choice about where they gain employment and what working conditions they are subjected to. As the authors uncover, for the mainly Hispanic communities that live and work in the Central Valley of California – an area where mega dairies dominate – safe drinking water is considered a luxury.
And thus, the list of the devastating effects of the demands for cheaper and cheaper animal products goes on and on.
Though certainly not a handbook for creating a vegan world, Farmageddon is a carefully balanced compendium of well-researched facts, alongside a valid emotional response to the plight of the factory farmed animal. For me, it was a galvanizing and worthy read.
***

Emma Silverthorn is a freelance writer living in East London. For more of her work, check out Running in Heels as well as her series of guest articles on Philip Lymbery’s blog, A Compassionate World.
Share 0 FacebookTwitterPinterestEmail
previous post