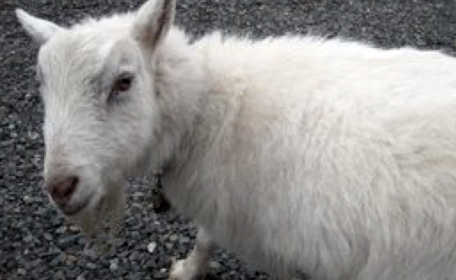 Kickstarter has officially fascinated me. It’s a website geared toward assisting “creative ideas and ambitious endeavors.” Do you have an idea for a film, book, song, invention, or whatever (!!), that you know would change the world for animals if you could only get it off the ground?  Then Kickstarter is the place to start.

So how can this help animals? Well, here’s one way: I first heard about Kickstarter from activist and filmmaker Mary Gillen, who is in her third year of the grad film program at Columbia University and is making her film thesis about a goat. Mary set up a page on Kickstarter, in hopes that people will support her project.

A little more about the project:

The story for SNOWBALL was inspired by a 10 year old pygmy-dwarf goat named Snowball, who I met two years ago during a visit to Woodstock Farm Animal Sanctuary. He had been living a cushy life in the suburbs with an adoring human family. But when his caretaker passed away he was brought to the sanctuary, much to his chagrin. At first, Snowball was very depressed and wanted nothing to do with other farm animals. He eventually learned to socialize with others of his kind and adapted to life on the farm quite nicely.

My aim is to get SNOWBALL in front of audiences and draw attention to farm animals as the unique, sentient beings they are! Why are they any different from a cat or dog? I’d like to posit that question in an accessible, comedic way that just might touch a few hearts too.

Cool, huh? Finally a way for creative types, like Mary (and you?!?), to get some of the funding they need without having to please grantors who may not share their vision, or their attitudes about animals. Kickstarter can provide you with amazing opportunities for fund-raising for your own creative project that benefits animals. At the same time, even just the presence of your page on the site can create the possibility for “non-animal people” to get turned on to animal issues.

Kickstarter assists you with raising money and awareness at the same time; imagine that!

Why You Should “Crush It”