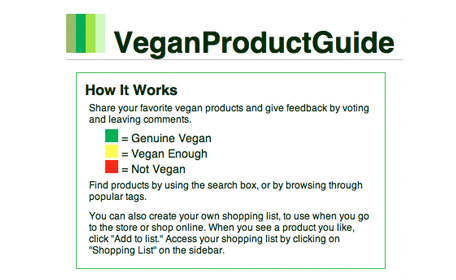 This is clearly an idea whose time has come! There are so many new products popping up every day that it’s impossible for anyone, on their own, to keep track. To solve this happy conundrum, the Vegan Product Guide allows us to all get together to educate each other about the latest vegan goodies. The Guide is a user-run resource that allows folks to find and share plant-based edibles and products. According to the website, “By allowing users to contribute data on foods and products, the Guide is an alternative to static lists that require constant maintenance to stay up to date.” The creators of this also point out that their goal is not to be “the vegan police.” Instead, the goal is to serve our ever-growing community in order to make veganism more easily accessible and to “help people make informed decisions.” 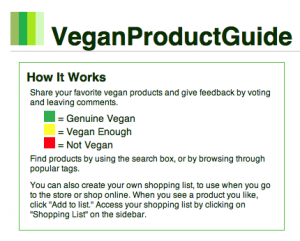 Products break down into three categories: Genuine Vegan, Vegan Enough, and Not Vegan. I was perplexed by the “Vegan Enough” category, and was curious to find something that fit into it. From what I could tell, it seems to identify products that some people think of as vegan, and others do not, like products that contain honey. For example, according to Vegan Product Guide, products like McDonalds Fruit & Maple Oatmeal with no light cream or the Panera Mediterranean Veggie Sandwich with no feta are “vegan enough,” rather than “genuine vegan” because they contain honey. I like the idea of a third category for products about which people might differ. It allows a wide variety of people to easily use the site without focusing on differences. Thus, since I choose not to consume honey, I can easily find those products that don’t contain it. I also like that those who do consume it will be enlightened to the fact that there are issues with whether honey should really be considered vegan, while still being welcomed to the site.