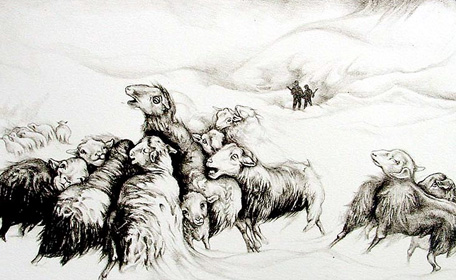 The amazing work of activist-artist Sue Coe never fades in its immense profundity. If you ever need a kick in the pants to remind you about why you’re striving to change the world for animals, Sue Coe’s work will do the trick. That’s exactly why we’re so thrilled to feature her in this Art of the Animal video once again on #ThrowbackThursday!
This article originally appeared on Our Hen House on December 20, 2011. If you’d like to see a certain OHH article resurrected, email us at info [at] ourhenhouse [dot] org.
***
Sue Coe is one of my heroes. She basically epitomizes the essence of our Art of the Animal video series, which features artists of all kinds who speak up for animals through their medium. We are, to say the least, thrilled — beside ourselves, really — to be featuring Sue Coe in this Art of the Animal video. As I write this, I am staring at a print of one of my favorite works of hers that hangs in our living room. It tells the story of Queenie, a cow who escaped a slaughterhouse in Queens, and wound up at Farm Sanctuary. 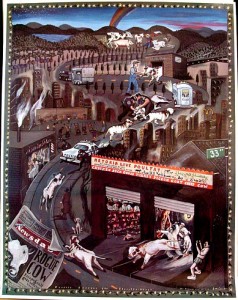 Our video-short takes you on a journey narrated by Sue herself, and features selections from her vast body of work. In it, she describes the impetus behind her life’s work – growing up next door to a hog farm and hearing the hogs’ screaming as they were led to slaughter. These experiences left an indelible mark on her. In turn, she leaves her own mark on the hearts and minds of anyone who views her images, which have been shown in galleries and museums all over the world. The unapologetically graphic nature of her work results in us, the viewers, bearing witness to suffering – a fate that began for Sue so many years ago – yet also leaves us feeling inspired to create change. For Sue Coe, and for many of us who take in her images, complacency is no longer an option. Though many vegans and animal rights advocates are already aware of these realities, even seasoned activists will be moved and inspired by Coe’s artistic explorations of animal suffering.
Now, we invite you to experience the revelatory images that document the reality of animal exploitation, and to learn first-hand from Sue Coe how her journey into this oftentimes dark, but very real world, manifested.

Episode 287: “They weren’t like us and for that reason deserved to be ruled.”