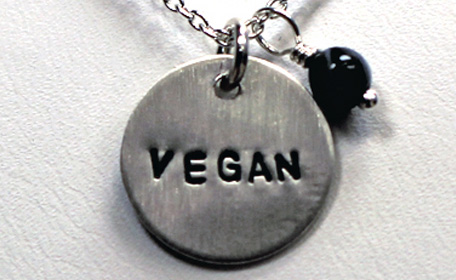 Bridging different social justice movements can be an empowering and eye-opening form of advocacy. I recently gave a workshop alongside Matt Rice — Mercy for Animals‘ NYC Campaign Coordinator — at the Institute for Critical Animal Studies North American Conference, focusing on Why Animal Rights is Central to Social Justice. And, as I’ve blogged about before, and I’ve written about for Satya Magazine (R.I.P. Satya — we miss you), the connection between gay rights and animal rights is of constant interest to me, and I know it is to several of you, too. I’ve also talked about the natural inclinations of certain animals — such as these two male flamingoes — to just … be true to their homosexual instincts, no questions asked, and the irony that those flamingoes adopted a motherless egg-turned-bird, but some gay humans are still not allowed to adopt children.

So I get all mushy inside when I see an animal rights group speaking up for both the LGBT community and the animals. When they’re not busy organizing heart-wrenching undercover investigations, Mercy for Animals (MFA) is doing just that — making the connections between gay rights and animal rights.

You might even remember when MFA’s Executive Director, Nathan Runkle, was ruthlessly attacked in an anti-gay hate crime in Ohio about a year and a half ago. MFA used that horrific crime to publicly ask that the attack lead to inclusion of gays in the Ohio hate crime law. The press release also pointed out that Runkle has been working “to bridge the gap between the common prejudices which lead to oppression and abuses faced by both animals and minorities” by protesting at gay rodeo events, and leafleting at gay pride events behind banners that say “No one is free when others are oppressed.”

The NYC Gay Pride event is coming up, and Matt Rice has informed me that, once again, MFA will be spreading compassion and raising awareness about equality for all. Here is the information:

NYC Pride Parade: Equality for All

Join compassionate MFA volunteers as we promote equality for all at the fun-filled NYC Pride Parade! We will march in the parade behind an MFA logo banner that declares “No one is free when others are oppressed,” with rainbow flags and bells and whistles. We will also have our best leafleters along the sides. Wear your MFA t-shirt, or, if you don’t have one, we’ll provide them. Join us for the fun and show your support of equality and animal advocacy!

For more information on the parade and other pride events, go to NYCPride.org.

We will be meeting up at the MFA Advocacy Center before the parade to enjoy a bagel breakfast, distribute t-shirts and meet other marchers. To show your spirit and join this event, please email Matt Rice or call 347.839.6464.

If you’re not in NYC but are interested in speaking up for all animals — human and non — remember to bring your favorite AR pamphlets to your other activist circles and help connect the pieces.

Photo: This image was originally posted to Flickr by bastique and was used with permission from the Creative Commons License.