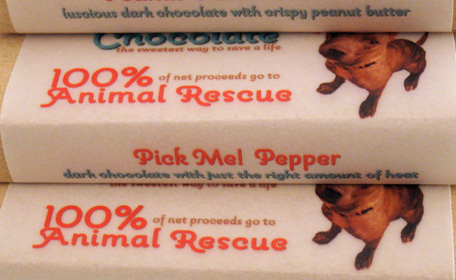 Call her the Sandra Dee of chocolate, the Milton Hershey of vegan activism. The product that Sarah Gross has created is nothing short of amazing, and I mean that in several senses …

Rescue Chocolate is literally saving animals’ lives, one bite of cruelty-free chocolate at a time. That’s because of two reasons: 1. 100% of the net proceeds of Rescue Chocolate go to animal charities, and 2. the products are deliciously vegan, so no cows were exploited in the process of creating this delicacy.

If ever I wished that I could offer you the opportunity to lick your computer just to get a taste, now would be that time. 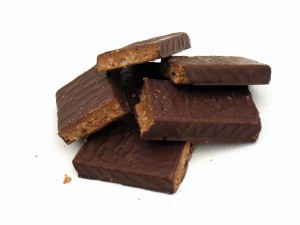 Here at Our Hen House, we like to feature entrepreneurs who are using their interests and skills for the betterment of animals. Sarah Gross epitomizes this with Rescue Chocolate. Sarah’s favorite chocolate item is called “Peanut Butter Pit Bull,” which not only tastes like a much more delicious and compassionate version of the old stand-by, Reese’s Peanut Butter Cups, but it also works as an educational tool. According to the website:

With their tenacious work drive and high intelligence, pit bulls are all about pleasing their owners and giving lots of love. They’ve been given a bad rap, but they’re only following the lead of their human companions. If you train them with love and affection, they’ll return the favor in spades. To know them is to love them!

I’m so excited about Rescue Chocolate, and you should be too. I recently got the chance the catch up with Sarah — who, by the way, is like a big ball of energy and a poof of glitter. Maybe that’s a side effect from the (vegan!) sugar?