This past weekend, Mariann and I had the honor of speaking at the first ever Bethlehem VegFest in Bethlehem, PA. Co-organized by activist Jaime Karpovich of the insightful and witty blog, Save the Kales, the VegFest was said to attract over 11,000 veg-curious attendees. We’re excited to report that our talk, “Let the Doughnut Do the Talking: Food as Activism,” was full to capacity, with a standing-room-only crowd spilling out of the speakers’ tent — opting to listen to a lecture about veganism and ways to get involved with “food activism,” instead of shopping at the dozens of jewelry and eco-product kiosks, sitting in on a food demo by some of the city’s top chefs (many of whom were not vegan but were featuring vegan dishes), or eating at one of the many veg food vendors (including Balasia, where we got a scrumptious quinoa, curry, veggies, and bean bowl for lunch).

In addition to being elated by the totally supportive, inquisitive audience who attended our talk, we were equally delighted to see that the most popular attraction at the Fest was Vegan Treats. Vegan Treats was a pioneer in putting vegan desserts on the map, and every year they seem to get yummier, and more beautiful. Lucky for us, they deliver to NYC once a week (on Tuesdays — and no, I’m not ashamed that I know that), but Bethlehem is their home town, and they were a huge presence at Saturday’s festivities. (Incidentally, Vegan Treats founder Danielle Konya will be on our podcast this coming weekend, so don’t miss that.) 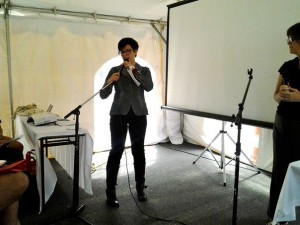 Me at the Bethlehem VegFest. Thanks to Joan Ozelis Calpin for this photo.

The talk we presented is one we’ve given in other incarnations in the past, including at the VegFests throughout the country that were recently featured on our “VegFest Mash-Up” video that we produced in collaboration with VegNews TV. However, right at the last minute, we found out that the one other animal rights and vegan-centered organization scheduled to speak was no longer able to make it. We had been assuming that they would cover Veganism 101 while we focused on our usual topic — ways to get involved with everyday advocacy. So we decided last-minute to add our very own Veganism 101 section to our spiel. And it turns out it was a very good idea, one that will remain part of our talks for a long time to come. 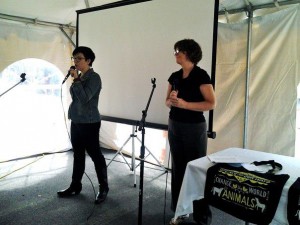 Me (left) and Mariann (right) during our talk. Thanks to Joan Ozelis Calpin for this photo too.

We added what we called our “Three 3’s.” Boiled down into quick sound bites, we laid out our 3 reasons to go vegan, our 3 tips on how to transition to a vegan diet, and our 3 top resources to learn more and support people in their process of going vegan. We promised to post these on our blog today, so here they are. We hope that you will comment with your own list of Three 3’s, since there are about 3 billion things that we could have included…

What are YOUR Three 3’s? Tell us below!

Episode 87: “This is winter wheat we’re sowing, and other hands will harvest.”