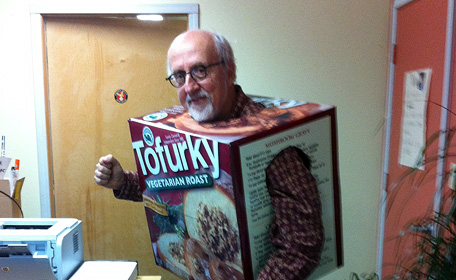 Surely you have noticed the disgusting trend of “Turkey Trots” in recent years, come Thanksgiving. They make me ill. Frequently, such events, touted as “family-friendly,” involve some kind of a short run, and other “festivities” that blindly make light of the mass murder of turkeys on this oppressive holiday. As Mercy for Animals has demonstrated most recently with their “Butterball Abuse” undercover investigation, the abuse and killing of turkeys for Thanksgiving knows no bounds. Thankfully, delicious and compassionate alternatives are literally everywhere. My favorite new resource this Thanksgiving was created by the inspiring and brilliant Colleen Patrick-Goudreau, whose new video, Vegan Thanksgiving, is full of useful, accessible, and fun ideas to make November 22 a truly memorable, delicious, and cruelty-free day.
Tofurky Trot, Anyone? 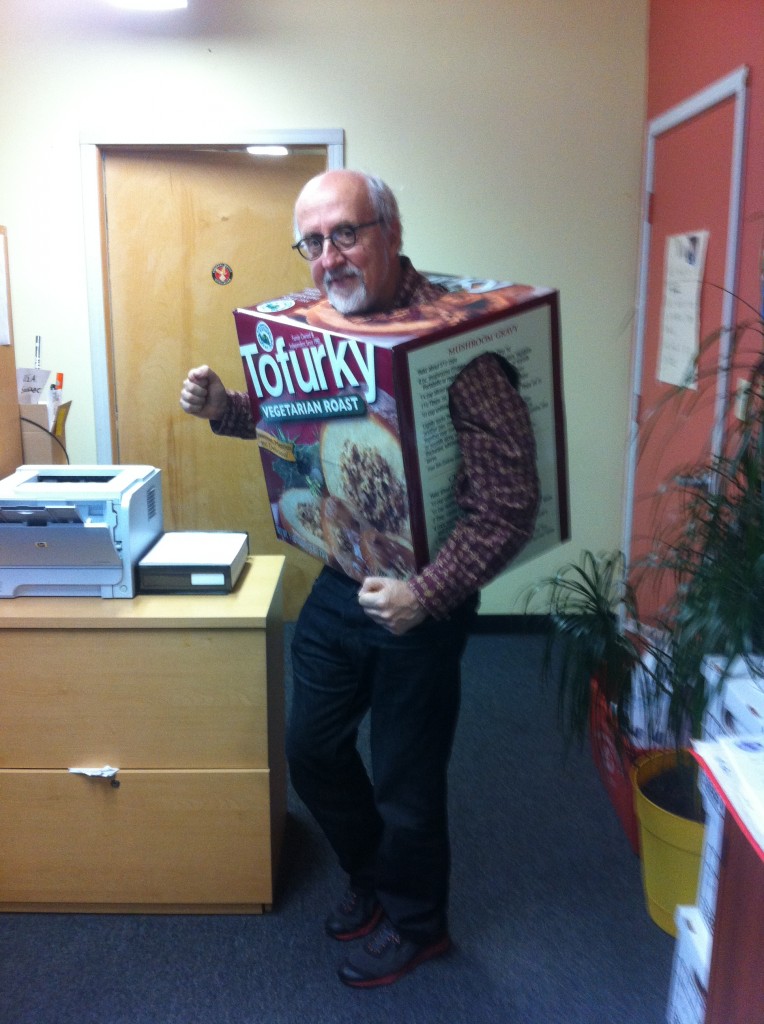 To counter the whole “Turkey Trot” weirdness and grossness, attorney (and Animal Law Master’s Degree student) Sarah Cruse, along with Tofurky founder Seth Tibbott (who was recently on our podcast, when we visited Tofurky headquarters) — along with yours truly — are putting together an informal Tofurky Trot, in Portland Oregon, on the morning of Thanksgiving. Seth (brave soul) will run the 4 miles in, yes, a human-sized Tofurky costume, and the rest of us will proudly don Tofurky T-shirts. At the culmination of this fun run (or walk, for those of you who don’t want to be seen near the big cardboard tofu guy — or who don’t have appropriate footwear), there is even talk of participants getting free Tofurky Roasts (we’ll also be provided with the T-shirts). If you’re in the City of Roses and you want to participate (and I mean, come on…), email Sarah at scruse [at] lclark [dot] edu.
Proceeds Will Support Vegan Feed-Ins for Hurricane Sandy Victims
Speaking of raising money (in addition to awareness), we are doing that too! When we heard about The Cinnamon Snail — a vegan food truck in the NYC/NJ area — which is currently working tirelessly to provide free vegan food to victims of Hurricane Sandy (their Facebook page details their schedule, including when you can find them parked in The Rockaways), we — well, we got all verklempt. But once we (sort of) recovered, we knew that we wanted our Tofurky Trot to help them out, so we’re suggesting that each of the runners donate at least $20 to their efforts. We also knew that we had to tell everyone we’ve ever met in our entire lives about their efforts to help. The tag line for The Cinnamon Snail states that they want to create and provide “food to help you transform into a being of pure light who can serve all living creatures simultaneously and eternally.” These folks are walking the walk, as they are on the frontlines of Sandy, providing (cruelty-free) sustenance and refuge. The owner of The Cinnamon Snail — Adam Sobel, who (hyperbole aside) is my new hero — will be chatting with us on our podcast this coming weekend, Episode 149.
DONATE TO THE CINNAMON SNAIL’S RELIEF EFFORTS TO PROVIDE FREE VEGAN FOOD TO VICTIMS OF HURRICANE SANDY

Bringing Vegan Canned Goods to Food Banks
In addition to raising money for The Cinnamon Snail, Sarah, Seth and I are asking the “Tofurky Trotters” to bring vegan canned goods with them, so that we can donate the goods to a local food bank. As I’ve talked about before, bringing cans of vegan food to your neighborhood food drive is a proactive step in ensuring that people who need it are being given plant-based options, which also, needless to say, is the best thing for their health. (You can also get involved with the all-vegan Food Not Bombs movement, or start your own chapter.)
What Have We Learned Today?
For the skimmers amongst you, let me make all of this easy.

Last Thing, I Swear
Let’s all remember how lucky and privileged we are. There are so many who are less lucky — both humans and non — who need each of us to step up to the plate and do our part. Have I told you lately to donate to The Cinnamon Snail’s rescue efforts? Let’s join forces. Each of us are desperately needed. Thank you, truly.
(Did you, uh, donate yet?)

Flannery in her whistle

Exclusive Excerpt from “Lifelong Running: Overcome the 11 Myths About Running and...