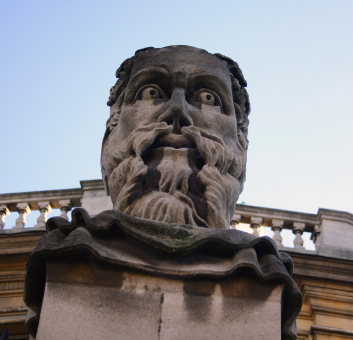 The attitude of most mainstream religions to animals has always perplexed me. Many give lip service to the idea that we should not be cruel to animals, but then not only fail to object to specific instances of cruelty, but participate in it, and even sometimes promote it. While this may make many people feel that animal advocates should just throw up their hands and ignore religions, that seems obviously wrong. Billions of people take their cues about how to live their lives from religious teachings. We need to do everything we can to reveal the inconsistencies between teaching and practice, and get those billions of people to recognize that they’re not going to heaven, or living by God’s will, or doing whatever it is they devoted themelves to when they signed on to their particular faith, if they don’t do right by animals. 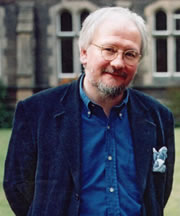 Andrew Linzey, Director of the Oxford Centre for Animal Ethics

One place where they take this topic seriously is the Oxford Centre for Animal Ethics, which was formed with the aim of creating “a world-wide association of academics from all disciplines who want to pioneer ethical perspectives on animals.” The director of the Centre is Andrew Linzey, one of the most prolific and insightful thinkers and authors on the subject of the relationship between animals and religious belief.
Recently, the Center announced that it will be conducting a new research project that will examine the questions of whether animals benefit or suffer thanks to religion, whether various traditions are animal-friendly, and whether the adherents of those traditions are more or less likely to be respectful to animals as a result of their faith. In attempting to answer these questions, this research project will, ultimately, examine the ethical adequacy of religious attitudes to animals. This question was inspired by Baptist Preacher Charles Spurgeon’s claim that a person cannot be a true Christian if his dog or cat is not the better off for it. 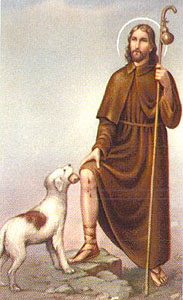 Saint Roch, Patron Saint of Dogs, with the dog who cured him of the plague

The project will not, however, be limited to Christianity, but will be multidisciplinary and multifaith, and will seek to involve, in addition to theologians and religious thinkers, other academics as well, including “social scientists, psychologists, historians, and criminologists.” Academics who are interested in contributing to the project are encouraged to contact the Centre’s Deputy Director, Clair Linzey, at depdirector [at] oxfordanimalethics.com or (+44) (0)1865 201565.
While the project is primarily for academics, I am keeping my eye on one particularly exciting aspect of the project that is currently in the planning stages for next summer. On July 21-23, 2014, the Centre will hold a Summer School on Religion and Animal Protection at St Stephen’s House, Oxford. St Stephen’s is an Anglican Theological College and a Hall of the University of Oxford. A call for papers will be issued soon.
I have to say, this “summer school” sounds seriously tempting, and I am really hoping that it will be open to anyone with an interest in the subject — and that I will somehow find a way to get myself there. For one thing, though I myself am not religious, I find religion endlessly fascinating. For another, I mean, Oxford? Seriously? Gaudy Night happens to be my absolute favorite Lord Peter Wimsey mystery. (Do you think after you attend you can tell people you studied at Oxford?)

Episode 183: “The time is coming, however, when people will be astonished that mankind needed so long a time to regard thoughtless injury to life as incompatible with ethics.”