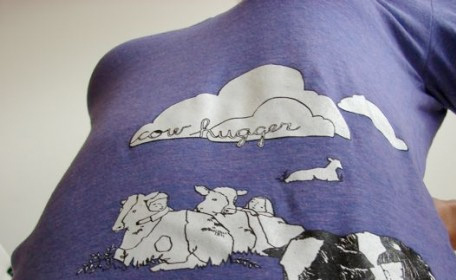 Scientist, advocate and all-around nice guy Jonathan Balcombe, who gave a fascinating interview on our podcast recently, has launched a new campaign that is so easy and yet so potentially effective that he hopes it will reach critical mass. Indeed, Jonathan’s newest venture is actually inspired by the  well-known “critical mass” bicycle events, where cyclists ride en masse, taking over the streets as a gentle (yet effective) reminder to motorists that they don’t own the road. The real point is that there is power in numbers, and Jonathan hopes to harness that power with Vegan T-Shirt Day — which is based on the remarkably simple concept that, on the first Saturday of every month, vegans everywhere will make it a point to proudly wear a pro-vegan or pro-animal message.

On the Facebook page for the campaign, participants flaunt photos and stories of what happened when they donned their favorite message wear for the most recent Vegan T-Shirt Day — everything from “Hail Seitan, Go Vegan” to “I Think, Therefore I Am a Vegan.” This is obviously an incredibly easy way to proudly proclaim your worldview for all to see. And if thousands of us do it, it will certainly start to seep into people’s consciousness, and likely start conversations. As Bruce Friedrich talked about when he was on our podcast a few months ago, his favorite shirt invites folks to ask him why he’s a vegetarian. Bruce follows that up with handing over some literature which he conveniently has on hand, furthering his personal advocacy and hopefully packing a punch. 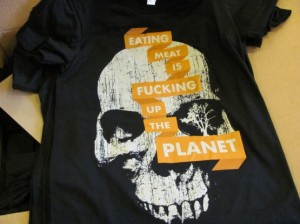 As with Gary Loewenthal’s massive success with the Worldwide Vegan Bake Sale, this kind of take-an-idea-and-run-with-it, then organize everyone to join in on the fun, is super simple thanks to the “Internet machine” (as Rachel Maddow calls it). I hope that Vegan T-Shirt Day catches on. Beyond that, I love the idea of using a Facebook page as a way to actually measure its success, perhaps creating a way to document the amount of conversations started, literature distributed, and — ideally — vegans created as a result of our being out and proud with our compassionate message.

As a reminder, this Saturday is June 4 — the first Saturday of the month. So do your laundry, boys and girls. It’s time to get that soy sauce stain out of your “Vegans Do It Better” tee.

Both t-shirts in this blog entry courtesy of Herbivore Clothing.