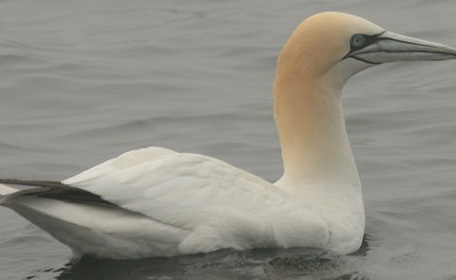 In the wake of the oil spill disaster off the gulf coast of Mexico, Our Hen House has been following People Protecting Animals and their Habitats’ efforts to rescue and rehabilitate wildlife. Executive Director Kelly Overton was on our podcast last week and will be again this week. Kelly is stationed in Louisiana and has been keeping us up to speed on where things stand regarding rescue efforts for the animals at risk.

Kelly has informed Our Hen House that there may be more wildlife affected by the oil spill than BP will admit. He is calling on them and on the U.S. Fish and Wildlife Service to release additional information on the effects on wildlife and wildlife habitats of the Deepwater Horizon Oil spill.

Earlier this week, the Associated Press reported that according to U.S. Fish and Wildlife Service, two birds — one pelican and one northern gannet — were released to Pelican Island National Wildlife Refuge. A U.S. Fish and Wildlife Service veterinarian stated that only 10 birds have been found dead from the oil, and that three others are currently in rehabilitation. That brings the total number of birds reported to be affected by the April 20 disaster — which has now spilled over 4 million gallons of oil into the gulf and surrounding animal habitats — to just 15.

In a conversation earlier today, Kelly told Our Hen House that the numbers announced and the actions taken simply don’t add up. “I find it impossible to believe that over a three week period, approximately 4 million gallons of oil has been pouring into the gulf 45 miles away from one of the nation’s most treasured wildlife refuges – and only 15 animals have been affected.” Kelly continued, “There has been no mention of the number of turtles, marine mammals and other wildlife being treated or discovered dead.”

Kelly, who has completed BP’s mandatory 3 module training for previously certified wildlife volunteers, and who holds a MPH in Disaster Management from Tulane, an MPA from Harvard and a Conservation Biology Graduate Certificate from Columbia University, was turned away from the Fort Jackson rehab facility by security. 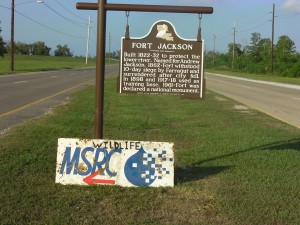 According to Kelly, the photo to the left shows the only sign letting people know the way to get to BP’s  wildlife treatment center. The sign is located on a highway where cars travel 60 MPH. When Kelly managed to find the sign and followed it to the wildlife refuge, the massive security presence made it impossible to enter.

“I was amazed,” he said. “I drove up to donate some supplies, like Pepto-Bismol, Dawn detergent, heating pads, and snacks for the workers. There were security personnel at the gate as well as in a boat by a water entrance. I had no motive other than to drop supplies, but security wouldn’t accept the donation. In fact, they got in a car and followed me out to the main road.”

Kelly is concerned that there are animals not being found and treated, and that  BP has not mobilized volunteers for the massive wildlife rescue that may be necessary when the oil does hit shore. “I think BP is looking out for their best interests,” he told us. “They certainly do not want the public to see pictures of dead and dying animals.”

But Kelly does not believe that BP — the group responsible for damaging the precious ecosystem of the gulf — should be in control of monitoring, reporting and fixing that damage. “There are people ready, willing and able to assist in this rescue.  I think this should be a public process, not a corporate process.”

Photo at top of blog: © Copyright Des Colhoun and licensed for reuse under this Creative Commons Licence.