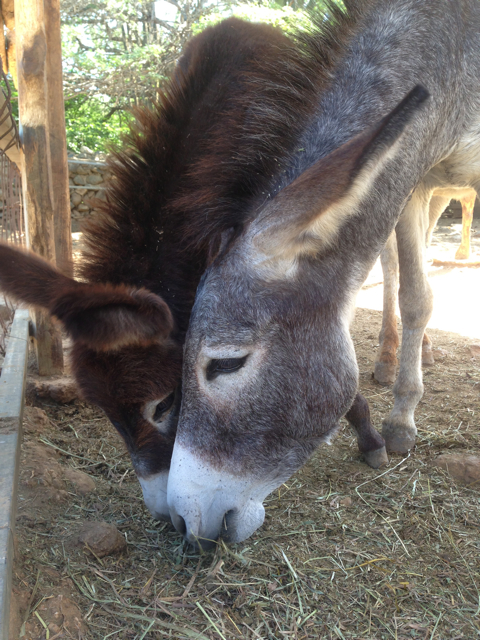 Photo essays have become one of our favorite new additions to our online magazine. We were delighted by the gorgeous photo essay that activist and photographer Chris Taylor recently compiled for Our Hen House, entitled “The Wetlands Is in the Duck and the Duck Is in the Wetlands.” There’s something so powerful about a written first-hand account of an extraordinary experience, backed up by photographs. When Our Hen House’s Graphic Designer Laurie Johnston (part of the brains and talent behind Two Trick Pony) wrote to me telling me about her unexpected visit to a donkey sanctuary in Aruba, I had two thoughts: First, I was intrigued, because I hadn’t heard of any donkey sanctuaries before. Then, I wondered what it would take for me to get Laurie to write about it for Our Hen House, since I was sure I wasn’t the only person out there to both adore donkeys and get downright giddy about a whole sanctuary for them (though the reasons why these precious creatures need a sanctuary in the first place are truly heartbreaking). Thankfully, all it took was me to ask, and Laurie was in. I think a trip to Aruba might be added to my wishlist. After you hear about Laurie’s experiences at this sanctuary, something tells me you might be joining me.

Sun, Sand, and Donkeys in Aruba

Frozen drinks with tiny umbrellas, sandy beaches, silly hats to shield us from the sun, and plenty of SPF 50 are what two pale New Englanders anticipated from a family vacation to Aruba. What my husband and I expected to leave behind was easy access to vegan food, along with all of our regular animal advocacy activities, which include volunteering at our local farmed animal sanctuary. Turns out we were only partly right.

About two-thirds of the way through a truly decadent week of doing absolutely nothing, we came across a map showing local points of interest. My eyes were immediately drawn to the middle of the map where, in tiny letters, were the words “Donkey Sanctuary.” What?! How did I not know about this? We made a beeline to the car rental desk and started to plan a road trip for the following day. We only had two days left in Aruba, and we absolutely had to meet these donkeys. To our surprise, my parents as well as my niece and nephew decided to join us. I was pleased at their interest, but at the same time concerned. Maybe I wasn’t giving my darling family enough credit? Regardless, I decided it was prudent to have a little talk with them. I asked them all to please be considerate of the animals, and told them this is the donkeys’ home and we need to be respectful. And, with a pointed glance at my six-year-old nephew, I made clear that under no circumstances was the word “jackass” to be uttered. There was no snickering. Nobody made jokes. Just silence. Good. I felt I had done what I could. The sanctuary was officially called Donkey Sanctuary Aruba. After going through the red gate at the entrance, which was surrounded by huge cactus plants, we followed the sandy path ahead. Suddenly, we turned a corner, and there in front of us were donkeys everywhere, roaming around alone, in pairs, or in groups. They were curious and friendly, especially once they knew we had brought apples. There were brown donkeys, white donkeys, gray donkeys, and a sweet old donkey with a Mohawk who allowed us to gather round him for a little photo shoot. Other than the occasional loud braying, the sanctuary was a quiet and peaceful place. We then spied a tall, fiery woman, who, we soon discovered, was the director of the sanctuary, Desiree Eldering. It was apparent by the easy, graceful way the donkeys interacted with her that she was utterly devoted to these individuals; she seemed completely at home with them. They trusted her, and she trusted them. It was a stunning thing to witness. Desiree told us and the other visitors the history and current situation of donkeys in Aruba. Brought there 500 years ago by the Spanish to provide transportation for people and cargo, donkeys played a vital role in the economy of the island until the introduction of the car. When they were no longer needed, donkeys were set free to roam wild, and, although they were able to survive well on their own if undisturbed, the population was severely decreased by disease, car and truck accidents, and, saddest of all, mistreatment from a society that began to view them as pests. By the 1970s, only 20 donkeys were counted on the island.

Before the donkeys became completely extinct, residents stepped in to protect the remaining few, and the population began to grow again. Today, around 100 donkeys survive in the wild, and an additional 90 reside at the sanctuary, which was founded in 1997 to continue the efforts to save the island’s donkeys. While all the donkeys were charming, the high point of the day came when Desiree introduced us to a very special pair, a mother and baby named Coco and Chula. When Coco arrived at the sanctuary with a dislocated leg, unbeknownst to the volunteers or the vet, she was pregnant. Chula, whose name means “beautiful” in Spanish, was born 10 months later, and is thriving alongside mom in a special enclosure until the pair can be integrated with the herd. Chula was especially friendly and seemed to enjoy human attention. As I watched my nephew Andrew pet Chula gently, I felt a twinge of guilt for not trusting his ability to be respectful. I saw firsthand the innate connection children have with non-human animals, and I was reminded of the importance of sanctuaries in fostering these relationships. Where else would Andrew have this opportunity to get to know donkeys in a way that honors, rather than exploits, these animals? This unexpected visit to Donkey Sanctuary Aruba was the highlight of our trip. Long after the piña colada hangovers subsided, the sunburns faded, and the sand washed out of our hair, we continue to remember the donkeys and the compassionate volunteers who care for them with the respect and love they deserve. Donkey Sanctuary Aruba accepts donations to support its work, and the sanctuary sells merchandise, including these absolutely must-have DNKY tees. Laurie Johnston, Our Hen House’s Graphic Designer, is one half of the eco-friendly design duo Two Trick Pony. As Co-Pony, Laurie’s day is filled with all sorts of adventures – like designing new greeting cards for obscure occasions (like “Happy Veganversary”), screen-printing said cards by hand, and playing fetch with her studio buddy Wally, the rescued Schnoodle. At a young age, Laurie began her road to animal activism with her love of animals – stuffed animals, that is. It probably came as no surprise to her parents that she stopped eating animals once she made the connection between Lamby, her childhood stuffed toy, and the meat on her plate. Fast forward a few decades, and she has found a way to use her creative skills and art school degree to help animals, both with her volunteer work for Our Hen House, as well as other animal organizations near her home in Central Massachusetts. Laurieshares her home with her husband Jake (aka “Mr. Pony”), Wally, and a few old cuddly friends (like Lamby).