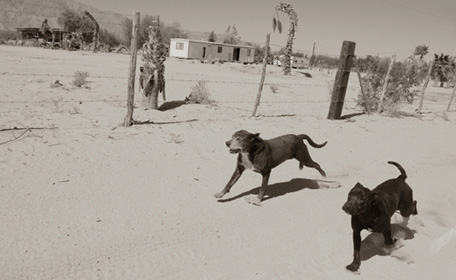 Maybe you’ve already heard of Traer Scott. I had, though I didn’t know it. I didn’t know her by name, but, boy, did I know her work. I knew all too well that one of her books, Shelter Dogs, sits on my bookshelf haunting me. It is full of harrowing and stunning black and white photos of dogs from inside of America’s “shelters” (quoted, of course, since many of the dogs who appeared in the book were put down, as is the fate of so many pit bull types, who Scott naturally focuses on). The book, a best-seller, is described:

By documenting the undeniable expressions of emotion in the dogs encountered in her volunteer work, Scott raises awareness of animal rescue causes, and especially the need for more adoptive homes for abandoned dogs. 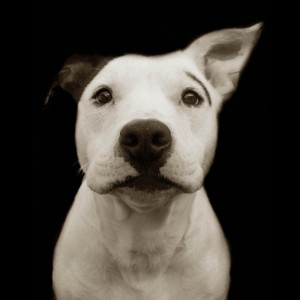 from “Shelter Dogs” by Traer Scott

Have I told you lately how much I love when artists use their (in this case otherworldly) talents to speak up for animals en masse?
Scott’s two other books, Street Dogs and Wild Horses: Endangered Beauty, have not yet been adopted by my book-obsessed household. In these works of art, she once again turns her shutter in the direction of sentient and misunderstood beings who are repeatedly marginalized (in somewhat different ways) by a society overrun with things like dogs and greed. The horses, of course, are endangered for a much different reason:

Now, because of such modern threats as urbanization and government round-ups, these noble creatures are fighting for their very survival.

There is something about a beautiful photograph that grabs at my heartstrings and doesn’t let go. When an animal in need is the subject of the photo, I all but melt into a pile of embarrassing goo. I am such a huge, ravenous fan of Traer Scott and the mass awareness she has raised about the plight of these beings. I have seen Shelter Dogs on display at major bookstores, and on the coffee tables of my most unlikely friends. I have witnessed, before my very eyes, her photos change the hearts and minds of the viewer.
And Scott’s blog, which is rarely updated, is nonetheless also a must-read for anybody who has ever known an animal, anybody with an ounce of empathy. Touching on heavy-hitting issues like the dire stray dog scene in Detroit, Scott provides, of course, stunning photos and remarkable insight. While you’re on her website (and set aside an afternoon), treat yourself to a virtual gallivant through her online portfolios. There are breathtaking images of shelter dogs, street dogs, and wild horses which — depending upon which way your head is tilted — will make you sing or cry.
Photos — both at top of blog and within blog — by Traer Scott