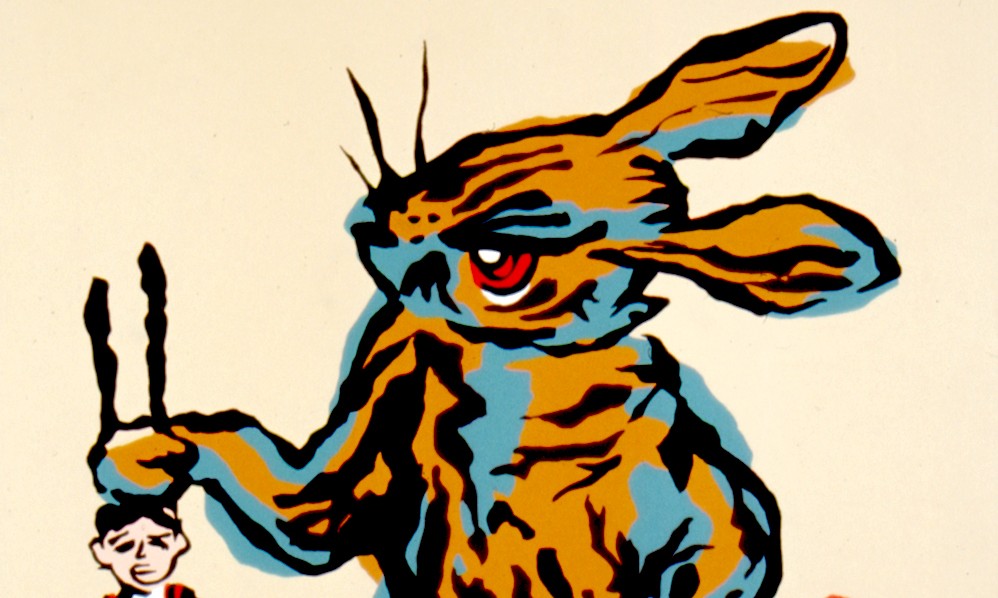 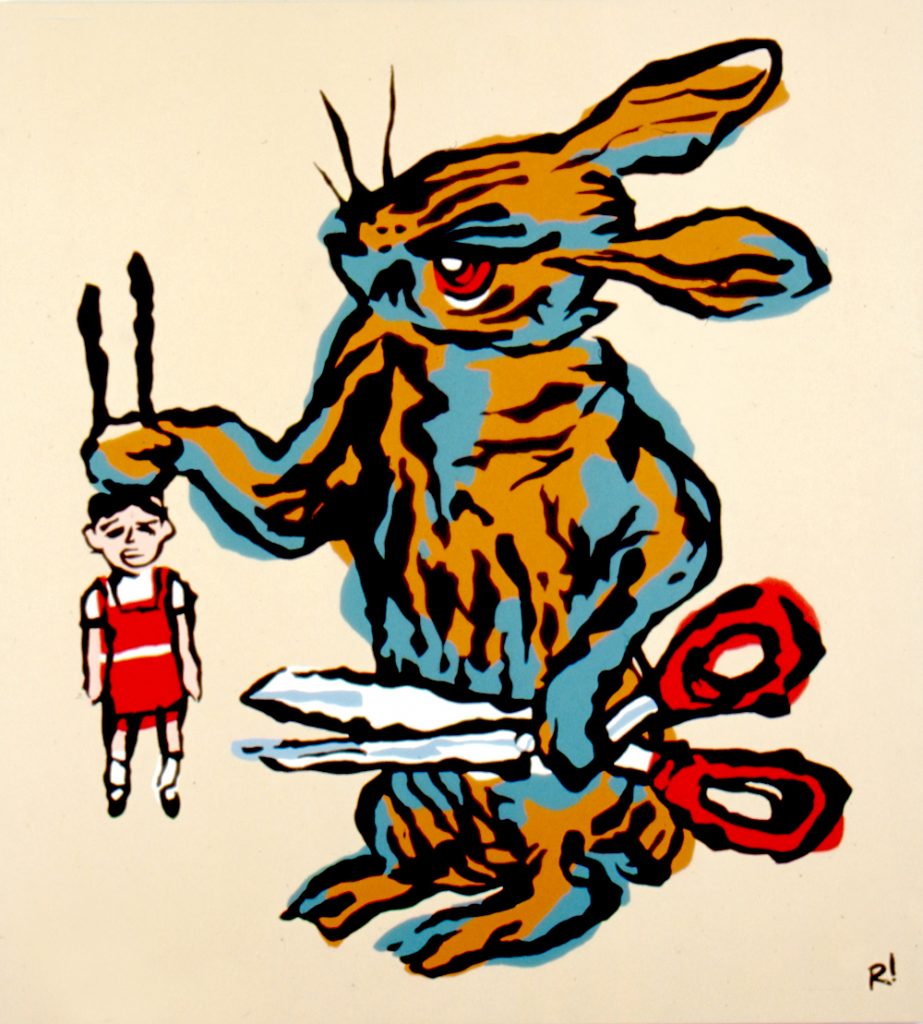 How do paintings, drawings, photographs and other forms of visual media influence the ways in which we think about and treat other species? How are the complex relationships that exist between humans and nonhuman animals made visible? What remains hidden from view?
As a historian of visual culture, I am particularly interested in these sorts of questions – how does what we see shape, challenge, and trouble dominant cultural assumptions about animals? How do these ideas change over time? In this column, which will appear regularly on Our Hen House, I will take the opportunity to examine an image, or images, that, for me, provide interesting answers to these questions.
For many of us, our first encounters with animals came in our childhood. In addition to relationships with family pets or visits to the zoo, storybooks filled with animal characters are one of the most common ways other species are introduced to children. Rabbits, geese, pigs, wolves, and mice are just some of the many creatures that can be found on the pages of best-selling children’s books. In most cases, these are anthropomorphic representations where nonhuman animals adopt characteristics more typically associated with human beings. The imaginative qualities that permit the blurring of boundaries between humans and nonhumans in these stories are what makes them so compelling. In these books there is usually a happy ending, interspecies harmony, and the resolution of whatever conflict may have propelled the narrative forward.
Lucky, a painting by Toronto-based artist Rob Elliott, asks us to consider what happens when the tables are turned, when the ending of the story is a bit more sinister. Elliott’s graphic style and use of bold, bright colors echoes the images made so familiar on the pages of children’s books. And yet, something is amiss.
In this painting, a rabbit wielding an oversized pair of scissors holds a small girl up by her hair. The girl’s hair, styled in braided “pigtails,” stretches out above her head, compositionally echoing the shape and position of a rabbit’s most identifying physiological trait, his or her ears. The visual similarity between pigtails and rabbit ears reinforces the blurring of boundaries between human and nonhuman in this picture. There is a sense of ominous uncertainty permeating the image. What will happen next?
This is a startling image, the jarring content reinforced by the large size of the canvas. At 36”x40” it has a commanding presence, and it is difficult to look away. This painting was part of a series called VEAL. Elliott describes this series as one “in which cute is set upon cute in a perversion of storybook norms.” The other paintings in this series also reflect these themes. For example, in Entertainment, a large monkey has a young boy on a tether, forcing the child to dance to the music of an accordion for the amusement of absent onlookers. In Geld, a large brown calf with a “livestock tag” in his ear and a menacing-looking knife in his mouth towers above a young blindfolded boy whose hands have been tied behind his back.
In these paintings, humans are vulnerable and at the mercy of nonhuman animals; the expected relationships of power reversed. Actions which have been normalized in human societies – the sale of animal body parts, the use of animals in entertainment, the brutalization of animals in agribusiness – are rendered terrifying when roles are reversed. As Elliott describes, “The talking animals of a thousand children’s DVDs take the next logical step and adopt other, less benign, human characteristics. VEAL is anthropomorphization run amok, the real-life versions of product spokes-animals setting the record straight with their youngest and most trusting consumers.”
These are powerful images because they ask viewers to think about the many contradictions that exist in our relationships with nonhuman animals. For example, the title of Lucky makes reference to “lucky” rabbit foot key chains. I vividly recall these from my youth – a rabbit’s paw dangling from a gold clasp, the fur dyed a bright unnatural color. Some were made from fake fur, others were body parts of actual rabbits. I didn’t own one of these, but envied the kids in my class who did – they were “cool” items to have. Upon reflection, I realize with horror just how easy it was to ignore the connections between a rabbit’s foot keychain and the pet bunnies we cuddled, fed, and loved in our home.
And this is precisely the point of Elliott’s VEAL series. As he states: “My work is about the turning point, making the viewer ask ‘How did this situation come to be?’ and ‘How is this going to turn out?’” This disquieting sense of uncertainty is what makes Elliott’s work so compelling. When viewing these works, it is difficult not to think of the deeply troubling ambiguities that characterize many of our relationships with nonhuman animals.
Elliott’s choice to reference the stylistic qualities of storybook illustrations is significant, for there exists a strong connection between how we treat animals and how we choose to represent them. Further, the allusion to children’s stories invites reconsideration of anthropomorphism as a representational technique. In the world of storybooks, it is common for nonhuman animals to be represented playing games, using tools, communicating with one another, feeling happy or sad, plotting elaborate schemes, seeking justice, and having grand adventures. While once considered far-fetched – suitable for stories, perhaps, but not a lens on “real life” – recent research indicates that these representations may not be that far off the mark. Mounting evidence presented by scientists like Marc Bekoff and Jonathan Balcombe indicate that nonhuman animals have social, moral, and emotional lives that are not all that different from what humans experience. While nonhuman animals may not wear neatly pressed jackets as they do in Beatrix Potter stories, nor brandish the kinds of weapons Rob Elliott depicts in his VEAL series, we can no longer ignore commonalities between species; creative representations like Lucky stand as a symbolic reminder of the troubling consequences of doing so.
*** 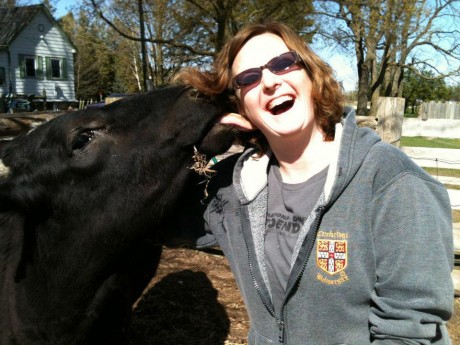 Keri Cronin is Chair of the Visual Arts Department at Brock University. She is a member of the Advisory Council for the National Museum of Animals & Society and also curated their Summer 2012 exhibition, “Be Kind: A Visual History of Humane Education, 1880-1945.” She is the author of Manufacturing National Park Nature: Photography, Ecology and the Wilderness Industry of Jasper (UBC Press, 2011), and co-editor (with Kirsty Robertson) of Imagining Resistance: Visual Culture and Activism in Canada (Wilfrid Laurier University Press, 2011).

Episode 152: “…they do not lie awake in the dark and weep for their sins…”