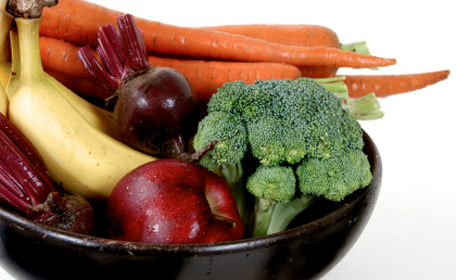 In the past few years, various “Veg Pledge” campaigns have gained traction and mainstream attention. An obvious example is “Meatless Mondays,” which has become popularized by folks like Oprah Winfrey and Martha Stewart — both of whom partake — as well as by thousands of media outlets, universities, businesses, and individuals. As we’ve seen, and as we vegans hope for, Veg Pledges — where people or businesses pledge to go vegan (or, in some cases, just vegetarian — which I think is insanely annoying, but some would say a good start) for a certain amount of time, be it a day, week, month, etc. — can frequently stick for good. Just this morning I was reading an interview on This Dish is Veg with bodybuilder LaQuesha McClain, who came to her newfound veganism by way of a “30 day trial.” After the 30 days were over, bam, she was in. There was no turning back.

The same thing happened for my mother. After I went vegan over 8 years ago (I had been a long-time vegetarian before then), Mom decided to try it out for a week. She asserted over and over again that she wasn’t doing this permanently. That was 8 years ago. Nowadays, her car is covered with bumper stickers proudly flaunting her veganism, and no one can get her to stop shooting her mouth off to fur-wearers, Facebook friends posting photos of steak, or the occasional grocery store shopper with a cart full of pus-laden dairy. Seems pretty permanent to me.

And so. I am indeed a fan of the “Veg Pledge” movement (yep — I called it a movement). Though I am in agreement that it is not in and of itself good enough for people to “just ‘go veg’ one day a week,” or one week a year, or “just for health” (it is, after all, about the animals and their unimaginable suffering), I have hope — I’ve got to — that pledges like this are one way in… of many. I have seen it work, and I also believe that the fact that it has penetrated the mainstream media is indeed a good thing. For those of you about to throw a temper tantrum, I will tell you, I’ve thrown that very same one. I am not the person who applauds someone for making the extremely obvious (to us) choice to stop their consumption of oppression. It is a no brainer. But when they “pledge,” I am absolutely right there by their side, seizing the opportunity to be supportive and provide them with resources, recipes, and a big “Ra Ra!”

Speaking of “Ra Ra,” my latest cheer goes to Compassion Over Killing (I actually try to toast to them at least twice a week, since I love them passionately and in mildly inappropriately ways). COK — a Washington D.C.-based organization that is busy exposing the truth in egg labeling, getting “go vegan!” ads on national T.V., and implementing National Vegan Hot Dog Month, is about to launch VegWeek 2012 — a “seven day celebration” that highlights the vital reasons for going vegan. As part of the Week, which will occur in conjunction with Earth Day, April 23-29,  thousands of participants will pledge go vegan, and — since COK wants them to stay that way (shhhh…) — the participants are provided with ample resources and information to make it as simple and tasty as possible. That, in conjunction with the facts about why veganism is a necessary step in order to preserve the planet, our own health, and — most importantly — why we need to boycott the cruelty of animal agriculture, is enough to make any “pledger” follow in the footsteps of my mother, and stick around.

Case in point: COK’s VegWeek was inspired by MD Senator Jamie Raskin, the very first person to take their pledge, a move that indeed stuck. Yep. Raskin continues to embrace a plant-based lifestyle, asserting that his new diet succeeds in “aligning my morals with my menu.” That’s what I’m talking about…

COK’s VegWeek has other components too, including getting restaurants in on the action, and hosting nationwide events that raise awareness (and deliciousness) about the benefits of veganism. This is grassroots advocacy at its finest.

Our Hen House is a proud partner organization on this campaign, and we hope that you will do your part in spreading the word to your not-yet-vegan colleagues, friends, family, and neighbors — and ask them to pledge to go vegan for 7 days. Remember to lead by example. Just as I might not have stuck with veganism had I not initially had loads of support from vegan friends — and just as my mom relied very much on my support — the people you get to pledge will need you! What’s beautiful about VegWeek is that, by pledging, they will also have the opportunity to receive daily VegWeek emails with recipes, meal ideas, dining tips, and more, but regardless, be sure to check in on them — even if that means you’re a tad pestering. “Atadpestering” is actually my middle name (weird, right?), and, I’m proud to say, it’s resulted in many people ditching meat, milk and eggs for good, opting instead to live a life in an ethical continuum with their values.

Spread the word! VegWeek 2012 is happening in conjunction with Earth Day, on April 23-29. Be sure to also “Like” and share VegWeek’s Facebook page, where your friends can actually take the pledge!