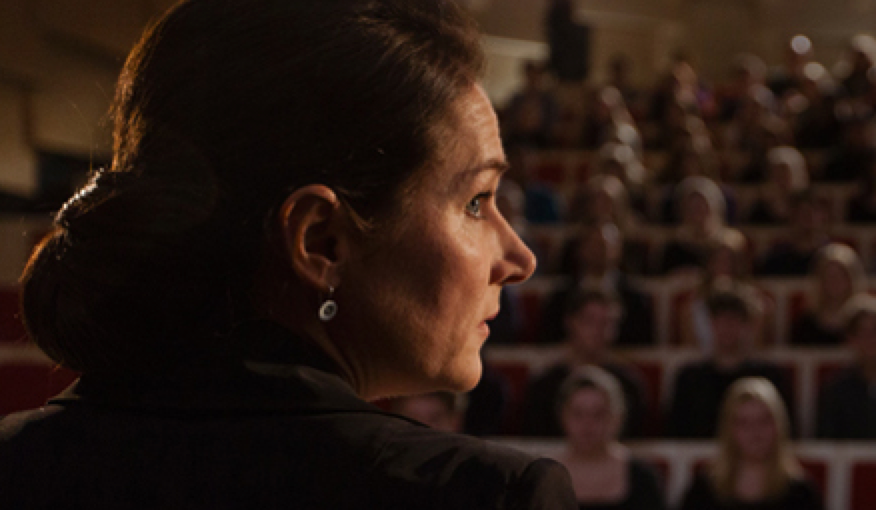 When TV shows include animal rights themes, we as a community set our DVRs and pat ourselves on the back for mainstreaming the issues enough so that the entertainment industry deems animal issues worthy of a show’s main storyline. When our comrades Martin Rowe (of Lantern Books) and Mia MacDonald (of Brighter Green) enlightened us to the recent episode (Season 3, Episode 4) of Borgen – the Danish version of The West Wing – and how it in fact centered around animal issues, we were intrigued. Martin and Mia’s further assessment of the episode – and the parallels it has generally to many of the opportunities and challenges presented to AR advocates when their issues become part of political campaigns, and also, specifically, to the NYC mayoral primary campaign – officially fascinated us. Lucky for us, today, Martin and Mia are sharing with all of us why this episode of Borgen hits so close to home.
***
Pork Politics
by Mia MacDonald and Martin Rowe 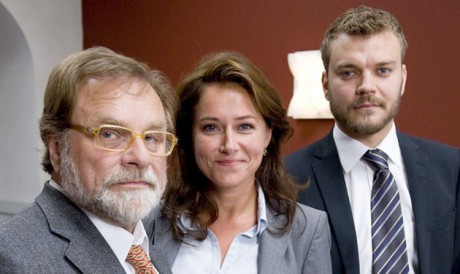 Since the 2006 inauguration of Matt Santos (played by Jimmy Smits) as President brought an end to The West Wing, those of us who enjoy literate and liberal political drama have found ourselves yearning for a TV series over which to obsess. Thankfully, the Danish series Borgen (“Parliament”) – whose third season is currently running on KCET, Los Angeles’ public broadcasting station – is filling the gap. It’s also, as we found out the other night, appealing to another passion in our lives: animal advocacy.
Borgen focuses on the lives and careers of two women: Birgitte Nyborg (Sidse Babett Knudsen) and Katrine Fønsmark (Birgitte Hjort Sørensen). In the first two seasons, Nyborg, leader of the small Moderates party, is catapulted into coalition government as Prime Minister, where she tries to maintain her values and marriage while fending off the opposition Liberals (who are, in fact, conservative). Fønsmark, a journalist on a television news show, navigates a complex personal and professional life. By season three, Nyborg is no longer Prime Minister. Disgusted by the Moderates’ shift to the right on immigration, she decides to form her own party, the New Democrats, and invites Fønsmark to join her as spokeswoman.
Fønsmark and Nyborg recognize they need an issue to garner attention, distinguish them from the other parties, and force the other politicians to acknowledge that the New Democrats exist. In the fourth episode of Season 3, that issue presents itself: animal welfare.
Nyborg is at dinner with her boyfriend when he becomes violently ill after eating what turns out to be penicillin-laden pork. (He’s allergic to antibiotics.)  Fønsmark’s brother Asger (Peter Plaugborg) runs a pig farm (one of many in this tiny country, which has twice as many pigs as people), and she and Nyborg go on a fact-finding mission. We see an entirely enclosed facility, with metal sow-stalls and concrete floors. Asger tells an obviously shocked Nyborg that the animals never go outside, and that Denmark’s sows now produce so abundantly that 25,000 surplus piglets are killed every day. Fearing revenge from other pig farmers, Asger requests anonymity and then confesses that he never eats the meat from these pigs, preferring to consume those he raises outdoors and without antibiotics.
Armed with this information, Nyborg and Fønsmark now know they have to provoke a response to a bill pending in Parliament that would reduce inspection of pig-breeding facilities. Who better to bait than Svend Åge Saltum, unrepentant industrial pig-farmer and leader of the far-right Freedom Party? Sure enough, Saltum bites and ends up docking a piglet’s tail on camera, an act that disgusts even members of his own party. A debate ensues in which Nyborg says that Denmark should produce quality animals rather than quantity. This provokes gaffe-prone Saltum to say that Nyborg should stop ascribing human emotions to “industrial products,” that people couldn’t afford meat at the prices Nyborg’s happy pigs would cost to grow, and that “we produce garbage because that’s what people prefer to eat.”
After this unpopular outburst, a chastened Saltum allows his colleague to announce that the Freedom Party now “speaks for animals” and offers an amendment to the bill that would ban tail docking and create a special police force to enforce animal welfare. Nyborg, in turn, offers Prime Minister Hesselboe (Søren Spanning) support for his bill if he creates an independent commission to look at a more humane, ecologically sound, and less intensive farming system – and gives the New Democrats credit by name and on camera. Hesselboe wryly comments before they face the media that a commission is merely “a government-funded discussion club.” Nyborg, as cunning a pro as Hesselboe, has allowed politics to shade her conviction.
Watching this episode, we couldn’t help but think of the recent primary campaign for the Democratic nomination for New York City Mayor. Here, too, a crowded field of candidates looked for a way to differentiate themselves from City Council President Christine Quinn, the establishment favorite who’d stopped several animal-welfare bills in the Council, including the banning of carriage horses in midtown Manhattan. 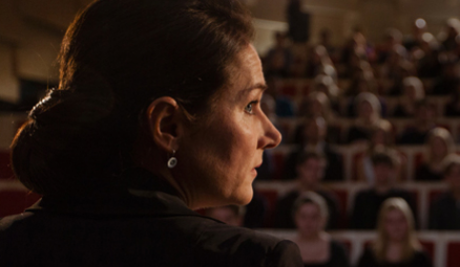 Both would-be office-holders and activists saw a way to distinguish themselves from Quinn and raise awareness of the issues. In May, nearly all Democratic and Republican candidates attended a forum on animal concerns; a leafleting campaign called “Anyone but Quinn” garnered media attention and ultimately (so pundits opined) political traction; and even Joe Lhota, the Republican candidate for mayor, was forced to announce his support for a ban on carriage horses.
For us, Borgen and NYC politics illustrate how animal welfare can be a useful wedge issue for politicians as well as advocates. The distinctiveness of animal issues can provide valuable free publicity and can help both politicos and activists define themselves and their opponents, raise awareness and money, and drive a debate into unexpected areas, with candidates pledging more than they’d initially anticipated they would.
Of course, as Borgen deftly shows, those “unexpected areas” may be unpalatable to some. The xenophobic and homophobic Freedom Party adopts a more pro-animal policy than the much more palatable New Democrats. For all its potentially outsized effect, the wedge issue is open to any opportunist, precisely because it can be unmoored from a sturdier, philosophical structure.
Moreover, even seemingly friendly politicians have ways to shelve an issue other than by breaking a campaign promise: Hesselboe’s independent commission may make recommendations that no party has any intention of carrying out; Bill de Blasio – overwhelming front-runner for mayor – is suggesting he’ll go back to the New York City Council to ban carriage horses. Who knows what more “important” issues will arise to distract that august body from actually passing legislation?
Borgen – for all its supposed fidelities to Danish politics – is a fiction. Moreover, Denmark is not the U.S. Its population is small and homogenous, voter participation is high, and the size of the country makes all media effectively national in scope. Coalition politics can give visibility to a marginal issue in a way that is not available in U.S. federal politics – with its large, entrenched parties; monied interests; and competing power centers. These are reasons why municipalities and states may offer U.S. animal advocates an easier path to success in changing legislators’ minds than aiming for federal legislation (witness, for instance, the Los Angeles City Council’s recent ban on the use of bull-hooks on elephants).
After three decades of consciousness-raising and conscience-pricking, animal advocacy is moving toward real political engagement. Shows such as Borgen offer an entertaining glimpse into how advocates must hone their skills to negotiate the halls of power effectively and how the movement as a whole needs to prepare itself for the messiness and disappointments (as well as triumphs and successes) that legislation provides. Chancellor Bismarck of Germany famously (and apparently apocryphally) said that “Laws are like sausages – it is best not to see them being made” – two unpalatable activities that Borgen brilliantly links in episode 4. In the penultimate scene, Nyborg tells her boyfriend that the newspapers are saying “that they won as a party but …” “… the pigs lost,” he finishes. “You got what you wanted: recognition,” he continues. “And the pigs will at least get a commission.”
*** 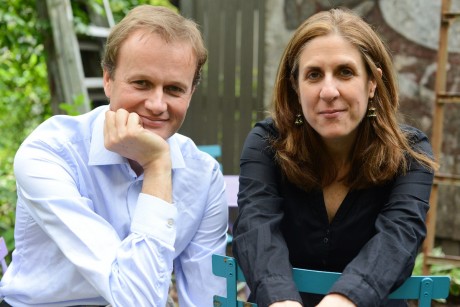 Martin Rowe is the publisher at Lantern Books and the author of The Polar Bear in the Zoo: A Speculation. Mia MacDonald is the executive director of Brighter Green, a public-policy “action” tank. Both of them live in Brooklyn, New York.
Share 0 FacebookTwitterPinterestEmail
previous post