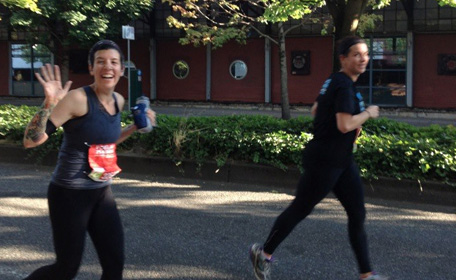 Long distance running is personal and political, but even more, it’s transcendental. You transcend “normal” behavior as well as your own expectations. Over time, this serial transcendence plateaus at a different idea of “normal.” Through this beautiful, empowering process, you locate and relocate your identity. You constantly create new conceptions of what’s possible and those new concepts become part of you. The key here is this: You then become more involved with the world as an agent of change. You rage a bit. And this entire process is modeled. Others witness it; many are moved by it—they change for the better.  In this ongoing empowerment and transcendence, you are a public model, whether or not you think so. When you start running seventy miles a week, the people around you will eventually take notice and become curious. It’s an exceptional thing.
A very similar scenario—this internalizing, identifying, witnessing, and modeling— happens with vegan advocacy. My chances of convincing a non-runner to run by declaring “run!” are the same as convincing a non-vegan to go vegan by declaring “go vegan!”  Basically zero. Yes, you have to make your case, and there are a million ways to do it, but ultimately you have to do so while putting yourself out there, by allowing yourself to be witnessed. It’s risky as all hell, but there’s really no choice. A long distance runner cannot hide her running identity any more easily than a vegan advocate can hide his vegan identity. Nor should they hide it. Exposure has its costs, for sure, but the rewards are sublime; just ask any ethical vegan or self-identified marathoner. In these ways, both long distance running and ethical veganism etch positive standards—personal and political—into the pantheon of unrealized possibilities.

On our podcast last week — Episode 143 — Mariann and I further discussed the possible connections between running and veganism. That conversation, which left both of us feeling somewhat vulnerable — as we had each opened up quite personally about our feelings — started what I believe is just the beginning of an ongoing dialogue I will continue to have with myself and others about transcendence, both personal and collective. The jury is still out regarding how I feel about the possible connections between running and veganism. I am still not sure if running is completely self-involved, or if it connects to a larger unity that ultimately brings about a greater good. At the moment, I tend to think the former — that’s it’s an intensely personal experience that begins and ends there. It does, however, open up the possibility of tapping into a very impressionable, almost cult-like group — runners — and advocating veganism. It also allows for the possibility of having discussions of things like wool-free socks and leather-free shoes, in mixed company. But then again, every circle in our lives can allow us to have these openings, if we let them. So I am not sure if that kind of advocacy relates to veganism in particular. This topic is one that I also chatted a bit about just last week when I was interviewed for the vegan episode of the podcast, Runners Roundtable (alongside Colleen Patrick-Goudreau, Amanda Lanza, Megan Storms, and Gordon Harvey). There is so much to ponder that it can almost be overwhelming. I wish there was a training regime for pondering.
I wound up finishing my half marathon. I ran my 13.1 miles. Some good friends came out to be with me during the race, and afterwards, to celebrate, we made some crazy good pancakes, thanks to Carrie On Vegan. Despite the ultimate success, there were some spots where I was far from optimistic. Around mile 10, my right knee started to hurt in unexpected and new ways — searing pain that did not die down. “Mind over matter,” I thought, as I tried my best to recall the various mantras that friends had told me about these past few months, little sayings that got them through long runs. Somehow, all the mantras became a mish-mosh in my brain, and I found myself unintentionally reciting: “I own my bread.” I was, by this point, delirious. Don’t ask me what I was actually trying to say. I have no friggin’ idea.
And so here I am. I did it. I ran my race and I am only limping a little bit today. I set my mind on something and I got there. I feel very proud, and also a tiny bit sad — a natural let-down that I imagine is par for the course. Kind of like December 26. The gifts have been opened.
The night of my race, we all went to a swing club, where a favorite band of ours was performing. A gallant gentlemen even asked me to dance. He was, of course, 20 years too late, but I said yes anyway — ignoring my unbendy knees. What a day.
All of that said, here is how I can currently boil down my thoughts: Running is so ridiculously wonderful, and so completely stupid. Both of these are, I believe, accurate. It is, after all, self-indulgent — at least to a degree. But, of course, I am also insanely proud of myself, and I feel energized, inspired, and — yes — changed.
Now that the race is over, I am also left thinking a bit about the need to pay attention to small victories, and how important that is for us activists. Though on one hand you could argue that my race was a somewhat arbitrary accomplishment, I really do look at it as a tiny victory. Honestly, it is almost masochistic not to. Transcendent or not, I accomplished it, and ignoring that would be almost as mean to myself as those kids who called me horrible names in grade school. What’s the point in working hard if you can’t have beer to celebrate? Or, if not beer, at least a self-induced pat on the back?
Same thing goes for working in animal rights. We are, in a lot of ways, racing our hearts out. There is no time to spare! Yet if we don’t at least slow down every now and then and notice how far we as a movement have come, we will put ourselves at risk for burnout. There is actually a lot to celebrate here, if we can put aside our sadness and anger for just a few minutes. One thing that gives me hope, for example, is the Vegetarian Resource Group’s recent study that says that 2.5% of US adults are vegan — which is up from just 1% in 2008! That jump, in such a short amount of time, is staggering! Let’s celebrate that! Sure, we could then say, “Yeah, but look at all the animals still being killed…” And that’s true too! But, for our own sanity, we need to stop and have that beer, or maybe just a smile. Just for a moment.
Of course, when talking about the possible connections one can draw between running and veganism, there is a lot that is also completely irrelevant. And I don’t mean to imply that running is as important — or even in the same ballpark or universe, really — as activism. Hopefully this goes without saying, but animal rights is, to me, the most important issue facing the world today, and it is our absolute moral imperative to do everything we can to speak up for those who can’t speak up for themselves (for animals of all kinds — humans and non).
There is so much to ponder, to act on, and so much to accomplish. For me, I’m finding that sometimes it takes a few sore muscles to get me thinking in new directions. It reboots me. I am ready. Let’s win this race. 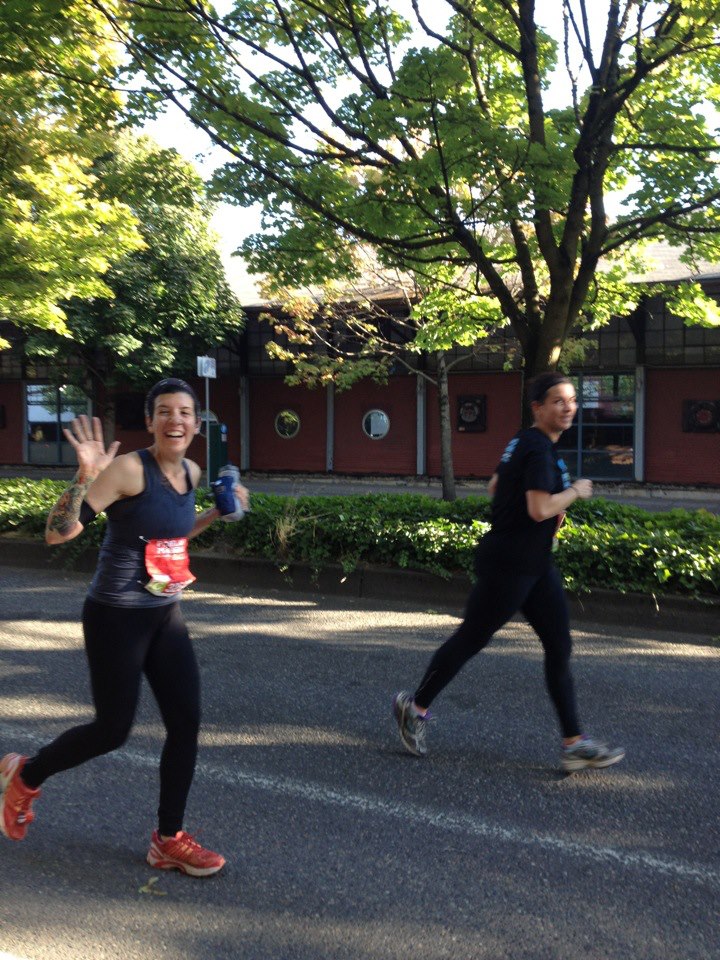