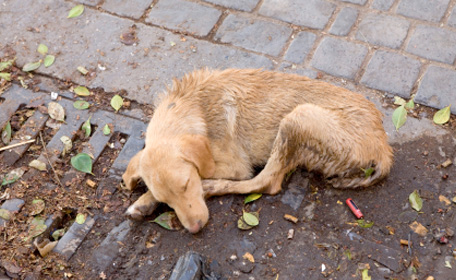 Recently, attorney Anjali Sharma of Chennai, India, could be found taking time off from her usual work as a Supreme Court and Delhi High Court lawyer to give a presentation at a conference sponsored by The Voice of Stray Dogs on “Basic Laws and Rights for Stray Dogs in India.” This is such important work, since the plight of strays in India is often dreadful, and the many people who want to step up and help them need to be educated as much as possible to the laws that protect them. As in the US, much of what goes on regarding animals may be illegal, but if laws aren’t recognized and enforced, they can do no good. It’s great to see a lawyers using their skills to help people enforce the laws.
But the reason I wanted to tell you about Sharma’s work is very different. According to IBN Live, though she has, herself, taken in as many strays as she is able to, and rehomed them when possible, early on she realized that there were far too many. In India, unlike in the US, homeless animals are not all carefully rounded up so that, if they can’t find a home, their untimely deaths will be safely hidden from view. So, as in much of the world, stray dogs are ubiquitous.

But Sharma did not simply abandon those she could not shelter. Instead, in addition to her legal work on behalf of animals, Sharma has, for years, found a very personal way to help the individual strays that she comes across. Every day, she collects uneaten but still edible food from local restaurants and drives around feeding it to dogs. As she notes, from day to day her dogs could be eating anything from “salad to sushi, meats and even Thai food sometimes.”.
This idea is so powerful. Our society is so full of waste of every sort, and if we can just harness that waste and use if for good, we have accomplished two wonderful things. And if we look around with a creative eye, we can find so many ways to help animals who seem to be beyond help. Of course, it’s pitiable that some of the food that these dogs are fed, and that would otherwise be thrown in the garbage, is the product of other animals who have suffered. We have so many fights to win. But if each of us steps up to the plate, as Sharma does every day, and finds our own way to help them, we truly can change the world.