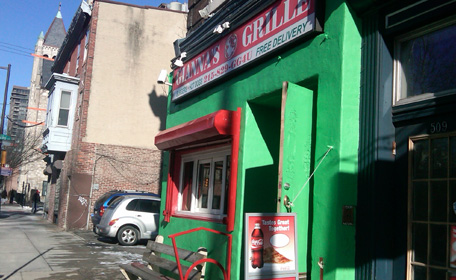 We had totally amazing vegan Philly cheesesteaks – in Philly, of all places – today at Gianna’s Grille. When we saw this neighborhood hole-in-the-wall, we thought, surely this can’t be the vegan-friendly café we were looking for – it was too…regular. But in fact, it had an extensive vegan menu (though it could stand to crank up the heat; like everywhere else this year, winter in Philly is c-c-cold!). 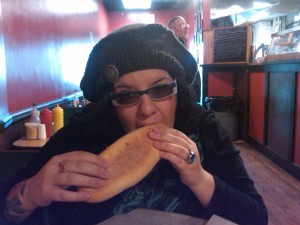 Taking that route is Three Brothers Pizzeria in Rockville Center on Long Island – which we’ve heard is fabulous, but haven’t yet visited. Word has it that one of the Three Brothers had a kid who is a vegan, and god bless the vegan offspring. With Junior’s encouragement, a vegan menu – a restaurant within the restaurant, kind of – was born.

Of course, you would have to keep your eyes open for the right partnership or management opportunity, but if restaurants are your thing, it could be a win-win for everyone. And this might not be for everyone – justifiably, you might not be interested in going into a business that supports meat, even if what you’re bringing to the table is all vegan. On one hand, you might see this as unethical. But on another level, bringing vegan food to a non-vegan venture can do some real big good. You’d have the power to very effectively mainstream the message – the message being that compassionate cuisine can be delectable.

Even if you don’t see a business opportunity here, you can still spread the word. Do your mom and pop run a restaurant? How ‘bout encouraging them to get some Gardein on the menu? Or maybe you’re a server for your day job – perhaps you should have a conversation with your boss about getting that new Daiya cheese on the new vegan pizza pie that you just know would sell if it’s marketed correctly? (“Eat green,” perhaps?) Maybe you have nothing whatsoever to do with the restaurant biz at all, but you frequent such-and-such café. Well, as a regular customer, you have the added bonus of making some regular suggestions – such as the one that goes like this: “Hey, have you ever thought about carrying Tofutti cream cheese?” 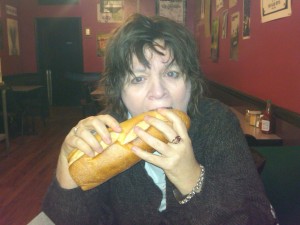 Mariann is in vegan Philly heaven.