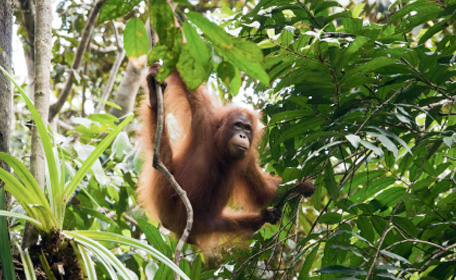 If the animal rights community doesn’t yet know about the new play, Leakey’s Ladies, it’s time to rectify that immediately. Mariann and I had the true pleasure of seeing this “multidisciplinary exploration” of the lives of of Jane Goodall, Dian Fossey, and Birute Galdikas last Saturday night at the Lower East Side’s social justice-minded theatre, Dixon Place.

The full-length one-act ride is actually comprised of three short plays, by three different playwrights, all interwoven into one — giving the audience the opportunity to delve into the work that groundbreaking primatologists Goodall, Fossey, and Galdikas did with, respectively, chimpanzees, gorillas, and orangutans. 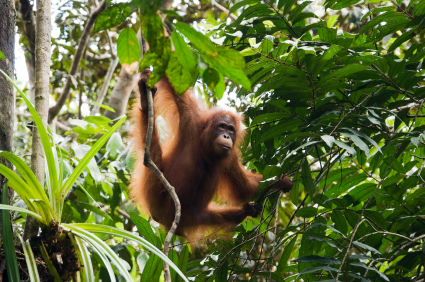 The origin of the title, Leakey’s Ladies — which was the one part of the play that I intensely disliked (more on that later) — is in the fact that all three of these women were inspired originally to do their work by anthropologist and game-changer, Louis Leakey. Beyond just a professional relationship, the personal connection that Leakey shared with all three women — the fondness they had for him, the mentorship and friendship he provided — was abundantly clear (and incredibly touching) throughout the play.

However, though Leakey had the foresight to get them started on their paths, his underlying goal was for the three women to study these animals in order to shed light on the human condition, and human origins; the animals themselves, and their sentience, were not his focus. In fact, the work of Fossey, Goodall, and Galdikas ended up going far beyond Leakey’s original mission.

As visualized throughout the play, frequently through the use of moving and effective puppetry, the women connect deeply to the animals — each in different, yet equally profound, ways. The women also become enmeshed in the political situations that surround, and often threaten, them and their work. Not surprisingly, the reality on the ground is far distanced from the “Ivory Tower” research project that was imagined prior to their beginning their projects.

It was particularly interesting to see the contrasts among the three women, and the way they approached their journey. The tender but fiercely determined Goodall was by far the most scientific, and was devoted to simply observing — even though even she was criticized vehemently in the scientific community for supposedly interfering with and anthropomorphizing the animals. Of course, the scientific community has always been quick to play the “anthropomorphizing card,” rather than taking the time, and the infinite patience, needed to see the animals as real. Perhaps more than anyone in history, Goodall saw the animals fully, and even when it became painful, refused to look away. She recognized the chimpanzees as individuals with unique personalities, and reported on them as such. Because of this, her contributions are incalculable — both to our understanding of chimpanzees, and of animals in general. 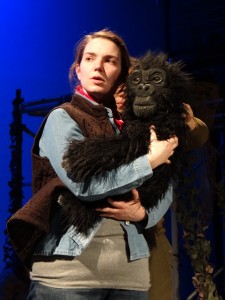 Dian Fossey was a much more emotional character who found herself in an extremely dire situation. At one gripping point in the play, there’s a brief but heart-wrenching retelling of how she had been captured and raped when she was in Congo. Fossey’s later work, in Rwanda, was also fraught with political nightmares — both in dealing with the government that wanted to exploit her work, and fighting the poachers, who, of course, ultimately ended her life.

Birute Galdikas, who came across as a bit of a hippie, was depicted as having enculturated herself much more into the Indonesian world in which she was living. Galdikas left her mark with, among other things, incredibly important observational research. What’s more –presented with a crisis situation in which, because of the trade, there were enormous numbers of orphaned orangutans — she founded a sanctuary, saving thousands of lives.

Through stunning puppetry, which was really beautifully done (just as in the play, War Horse, I forgot I was looking at puppets), as well as costumed actors and video projections, the audience was given the unique theatrical experience of seeing the animals themselves. Not only did this effectively show the intense relationship of the women to these animals, but it also displayed the tragedy of some of the animals’ lives, and gave us a glimpse into their sometimes funny, complicated, social, anti-social, and brave personalities. This was epitomized both in Galdikas’ relationship with TP, a male orangutan with whom she formed a real relationship, and in the truly heartbreaking story of Flo and Flint, which, for anyone who knows Goodall’s work, is all too familiar. The puppets also let us see into Dian Fossey’s relationship with one of her orphaned gorillas and witness up close her struggle about whether to take him in and raise him, knowing she might eventually have to turn him over to the government for life in a zoo.

Just as charming as the play itself was the space where it came to life. Dixon Place, the non-profit theatre that aims to, among other things, “contribute to the community” by making itself available “as a meeting place for social change organizations,” has, as one of their focuses, a bent toward LGBT issues and other issues affecting minority groups. Given that, it was refreshing to see a play focusing on the greatest underdogs of all — animals. And the fact that this work also highlighted the stories of three powerful women was icing on the cake for me (my cake, of course, was vegan). That is why I had issue with the title, Leakey’s Ladies. Though not to undercut the revolutionary work of Louis Leakey, and the primary role he played in fostering the work of Goodall, Galdikas, and Fossey, these truly extraordinary women stood their ground on their own, forging ahead despite nearly insurmountable obstacles. True, before anyone else believed in them, Leakey did. But why lump these women into a subsidiary role as this title seems to do? To me, it undermines the independent and trailblazing work of three pioneer women, at a time (late 60’s and early 70’s) when the women’s rights movement was only beginning to grow into a revolution.

But I digress. Silly name or not, Leakey’s Ladies is well worth a trip to the Lower East Side. For the most part, the main actors portrayed their characters with the necessary depth and emotion that the story demanded, but it was Tatiana Pavela’s masterful interpretation of Dian Fossey — complete with Pavela’s commanding presence, powerful voice, and surprisingly unabashed vulnerability — that stole the show. That, and the puppets, who were designed meticulously by David Valentine. It was all I could do to not “adopt” one of them on my way out of the theatre, when no one was looking…

In the history of Our Hen House — which is 2 years old almost to the day — we have only had a small handful of opportunities to cover theatrical productions that implicitly or explicitly dealt with animal rights issues. To name a few, there were: The Tragical-Comical Trial of Madame P and Other 4-Legged and Winged Creatures, which covered the medieval animal trials; the one-woman play, I’m Sorry: How a People-Pleasing Apologist Became an Animal-Loving Activist; and Dead Pile, a play that followed the story of an undercover investigator inside a dairy farm. The impetus for the Art of the Animal section was, of course, to highlight such work — as well as provide ideas and inspiration for others to get involved in the powerful arts/advocacy union. As someone with a background as an actor, this merging gives me fever-like chills. There is nothing greater than using the huge capacity of even the tiniest stage, and making it a tool to create change. Directed and designed by Gretchen Van Lente, Leakey’s Ladies, which we will further discuss and review this weekend on our podcast, has the wherewithal to change hearts and minds about animals. If it’s true that all the world’s a stage, then perhaps compassion is more within reach than we think.