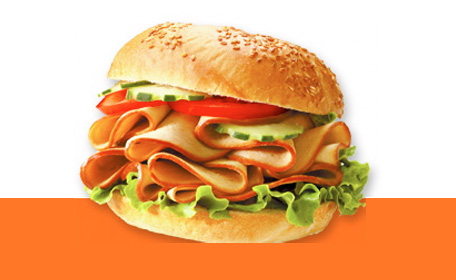 Compassion Over Killing (COK) has a new campaign that, when it succeeds, has the potential to make all of our lives better, and certainly more convenient. Most of all, it promises to reduce animal suffering on a vast scale. With their “We Love Subway” campaign, COK is asking the fast food sandwich place, Subway, to add vegan “meats” to their menu.

One thing I love about this campaign is it’s “YES!” factor. It’s affirming, positive, and attainable — three important factors to consider when shaping a campaign. They have also included a thorough and clear page answering the question, “Why Veggie Meats?” If you want Subway to offer vegan “meats” for their sandwiches, leave a comment (on the right sidebar) telling them so.

COK is certainly no stranger to restaurant outreach. As we discussed last week, they have done wonders adding delicious vegan options throughout cities like D.C., Baltimore, Austin, and Portland, and have also inspired innumerable keen activists to get involved with veganizing their own communities far and wide.

I find it funny (not in a “ha ha” way) when non-vegans — or even some vegans — say that there isn’t vegan food anywhere. Though I realize that NYC, where I live, is exceptional when it comes to vegan-friendliness, I’ve been to Small Town, USA many, many times, and not only do I always find something yummy to eat (even at non-vegan restaurants), I also always find fellow vegans and activists. As Mariann always says on our podcast, we are everywhere.

So is delicious vegan food. For new vegans — or vegan wannabes — that means changing your habits a little and looking a little harder. Soon, you’ll have a new routine centered around vegan goodness.

And if I’m wrong (actually, even if I’m right — which I am…), then why not “be the change you wish to see in the world” (thanks, G) and (gasp!) ask for vegan items, much like COK is doing with this Subway campaign.

A friend of mine who lives in Atlanta was recently telling me that his girlfriend is the bartender at a sports bar, where they have no vegan food. But, said my friend, the cooks make an amazing vegan something-0r-other for him and his girlfriend, whenever they ask.

Why not ask for that to be put on the menu permanently? Stop beginning sentences with “It’s too bad that…” and “I wish…” and “If only…” Make it happen! There are ample resources out there to help, including us here at Our Hen House, as well as groups like COK (see their Guide to Restaurant Outreach).

TODAY ONLY: Animal Liberation By Way of Healing Mantras