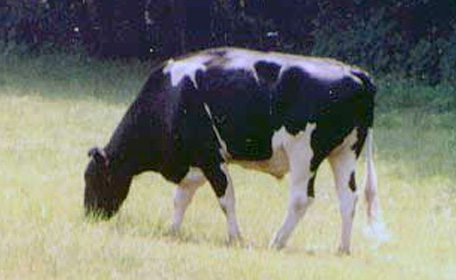 Poplar Spring Animal Sanctuary, a 400-acre refuge for farm animals and wildlife, located on the Potomac River just outside of Washington, D.C., is organizing their 8th annual Run for the Animals, scheduled for May 15 at Wheaton Regional Park in Wheaton, Maryland. With over 700 race participants expected this year — made up of both sanctuary supporters, as well as local runners who want to direct their athleticism in a compassionate direction — the “5k run and 1 mile fun walk” raises necessary funds for the sanctuary’s life-saving work. 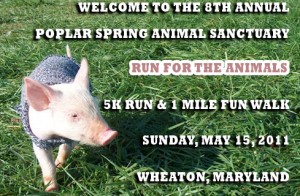 But more than that, this celebration presents enormous opportunities for activism. In addition to the fact that the Run garners media attention about the plight of farm animals (I enjoyed this radio interview with sanctuary co-founder Terry Cummings, which aired on several stations), at the Run itself, animal rights literature is distributed to participants.

The Run also gives the Sanctuary a chance to honor activists and supporters. According to Events Coordinator Mary Finelli, “Teams have also been organized to commemorate Poplar supporters who have passed away… This year, Team Bethany honors the memory of Bethany Richmond, a wonderful young activist who worked for PCRM and did a great deal of volunteer work for Poplar Spring.”

I’m a fan of using athletic, or, shall we say, un-sedentary events to raise money and awareness for animal issues. As the former national Walk for Farm Animals coordinator for Farm Sanctuary, as well as the former NYC Walk coordinator, I am aware of the many unexpected challenges (the word “permit” still gives me a headache) — and refreshing rewards (namely, the countless attendees who become awakened to animal issues) — that are all part of this kind of event. As Poplar Spring illustrates with their Run for the Animals, attracting hundreds of participants who don’t necessarily know about factory farming, and then using the event to shed light on the sentience of farm animals, and the necessity and deliciousness of adopting a vegan lifestyle, can be profound.

And there are so many ways to up the ante of your event, including leafleting and tabling, media outreach, special speakers from the world of animal rights, raffle prizes that raise money and highlight vegan businesses, letter-writing tables that allow folks to reach their legislators on important animal-related issues, vegan grub, and sign-up sheets that make it easy for you, the organizer, to follow up and further engage your participants. It looks like the Poplar Spring Run embodies much of that, and I have no doubt that it will be a fun and, for many, an eye-opening day. Be sure to register, sponsor a runner, or just make a general donation.

Don’t forget, even running in mainstream races, like the NYC Marathon or something similar, can be an activist opportunity if you make it one. We spoke with Dallas Vegan‘s Jamey Scott about this when he was a guest on our podcast. Jamey had just returned from the Chicago Marathon, where he raised money and attention for Mercy for Animals. If you are even somewhat athletically-inclined, enter a race or marathon, contact your favorite animal rights organization (don’t forget that Our Hen House is a 501(c)(3)!), and get started on using your leg muscles to further strengthen a very good cause.

Episode 67: “The fate of animals is of greater importance to me than the fear of appearing ridiculous.”

Vegan Cookies and Almond Milk for Santa: Making the Most of the...