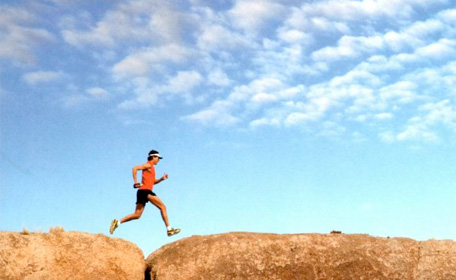 Run with Scott Jurek Tomorrow in NYC, and Read “Eat and Run” (ALSO Listen to Him On Our Podcast THIS WEEKEND!)

When it comes to countering lies about the healthfulness of vegan eating, it is always fun to be able to refer to ultra-fabulous ultra-marathoner Scott Jurek. His list of plant-powered accomplishments is too long to recount here, but, as just one example, he recently set a new American record by running 165.7 miles in 24 hours—6.5 marathons in one day. Yes, you read that correctly, though we agree: Some of us (eh-hem) are not even sure we could drive 165.7 miles in one day, let alone run… 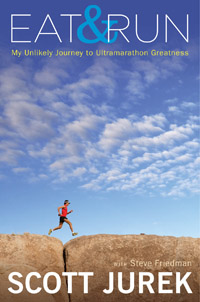 We’re therefore beyond excited that Scott has a new book coming out, with pretty much the best title we’ve heard in a long time. In Eat and Run: My Unlikely Journey to Ultramarathon Greatness, Jurek’s vegan diet will play a starring role in explaining his outstanding success. According to the promo, “From his Midwestern childhood of hunting, fishing, and cooking for his meat-and-potatoes family, to his early beginnings in running (he hated it), to his slow transition to ultrarunning and veganism, to his incredible, world-spanning, record-breaking races — Scott’s story shows the power of an iron will and the importance of thinking of our food as our fuel.” This book clearly has the potential to be a game-changer, and we could not be more excited about our upcoming interview with Scott on the Our Hen House podcast, airing this weekend! Yowsa!
In celebration of the launch of his book, Scott will be appearing in New York City tomorrow (Tuesday, June 5). We love the way this event, sponsored by Jack Rabbit Fitness, is structured. Sure, we’re excited about the talk itself, at The Ethical Culture Society, where this champion athlete can really fill people in on his inspiring story. And, yeah, it’s pretty amazing that he’ll be joined by actor Peter Sarsgaard and fellow vegan runner Christopher McDougall. But what’s especially cool is that the event will be preceded by a free “Fun Run” in Central Park. Lots of people will be showing up to run with this champion, and this is such a great way to introduce them to, and get them enthusiastic about, the power of plants. If you’re anywhere in the NYC area, we hope you’ll make it out.
Even if you’re not an athlete yourself, and even if you think of exercise as the rapid motion of your fingers typing on a keyboard, there is no denying that plant-powered athletes are carrying a powerful message to the mainstream. No matter what kind of nonsense the meat industrial complex tries to get out regarding the supposed health benefits, even health necessity, of meat and dairy, we have living proof that it just ain’t so — that, in fact, the best way to go, not only for the animals, but for ourselves, is vegan. We’re excited that two of our favorite vegan athletes, Brendan Brazier and Rich Roll, will be appearing at The Seed on June 16 and 17 in NYC. Since we’ll be speaking there too, we’ll be on hand to hear their stories, and we can’t wait! (Tip: When buying your tickets to The Seed, use the code “ourhenhouse” at check-out and receive 10% off.)
Don’t forget to tune in this Saturday to the Our Hen House podcast — Episode 126 — where Scott Jurek will enlighten all of us to the necessity of veganism when it comes to being an optimal athlete.
Share 0 FacebookTwitterPinterestEmail
previous post

Episode 125: “Most people would rather die than think; in fact, they do so.”