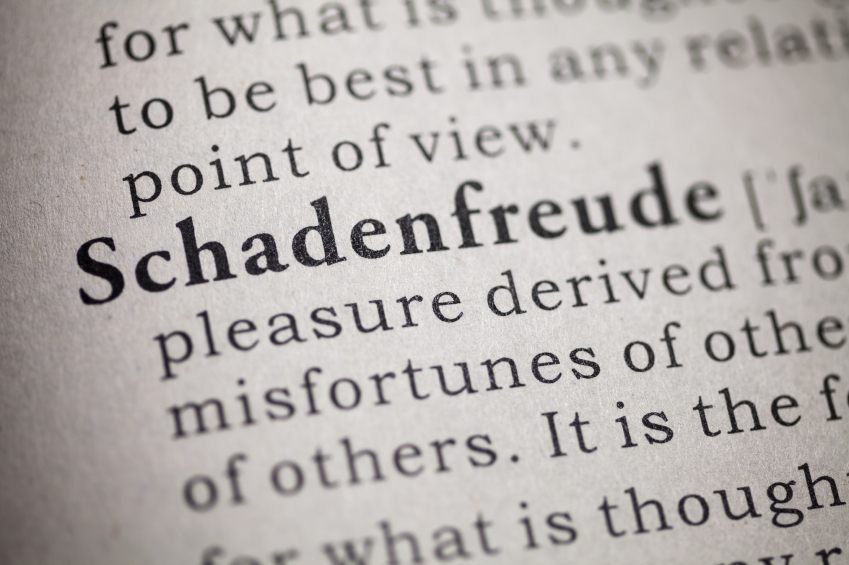 Using social psychology research as a tool to change the world for animals is becoming increasingly common, and we’re excited to have published Helen Kinsel‘s example of such use before it was gaining widespread attention. So here it is again on #ThrowbackThursday!
This article’s originally appeared on Our Hen House on March 24, 2014. If you’d like to see a certain OHH article resurrected, email us at info [at] ourhenhouse [dot] org.
***
Schadenfreude: Pleasure derived from the misfortune of others. What does this have to do with veganism? Today, Helen Kinsel explains.
***
Schadenfreude, Defensiveness, and Those Who Rebel
by Helen Kinsel 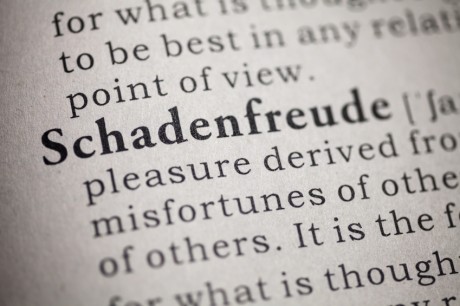 Recently on the Our Hen House podcast, Jasmin and Mariann discussed the idea of schadenfreude, or a feeling of joy in response to the trouble or misfortune of others. More specifically, they referenced a New York Times article that talks about the defensiveness, feared judgment, and moral inferiority a meat eater may feel simply in response to a vegetarian being in the room – and the joy, or schadenfreude, they may feel if they were to catch this person behaving hypocritically by consuming meat.
This reminded me of a research article that investigates the idea of “moral rebels,” or those who go against the norm due to their moral values. In this study, the researchers (Benoît Monin, Pamela Sawyer, and Matthew Marquez) were inspired by the many counterintuitive cases in which whistleblowers are simultaneously praised as heroes by the public and chastised by peers. One example of this is Joseph Darby, the soldier who reported the abuses at the Abu Ghraib prison. While most of those uninvolved would commend Darby for his actions, the threats by those viewing him as a “traitor” were so severe that Darby was placed under armed protection.
To better understand why someone who rebels on the basis of moral beliefs can be viewed positively by one group of people and at the same time so negatively by another, a series of experiments were conducted in which a “moral rebel,” someone who refused to participate in a task they considered against their beliefs, was judged by other participants. To make things more interesting, participants were placed in two groups: observers and actors. Participants in the observer group were uninvolved in the task, while participants in the actor group engaged in the task the rebel had deemed immoral.
In line with the researchers’ predictions, participants who simply observed the task held very different opinions of the rebel than participants who engaged in the task themselves.
For example, in an experiment where the moral rebel refused to participate in a racial profiling task, actors who had participated in the task disliked the rebel, while observers viewed the rebel as moral. As the researchers explain, “stepping foot in the situation as an unquestioning actor seems to change one’s very ‘conception of the good,’ whereas an observer behind the veil of ignorance sees a brave moral exemplar, an actor down in the trenches sees a self-righteous pest.”
Based on the experiments, the researchers concluded that actors felt resentment towards moral rebels due to their own fear of being rejected, and because they felt their self-confidence threatened.
Interestingly, however, if the actor was reassured of their own morality before being asked to judge the moral rebel, their opinion changed. Now their view of the rebel became much more similar to that held by the observer, and they were able to see the rebel as moral in their actions. These participants even felt less confident about their own behavior and felt they may have had more control over their actions than they previously believed.
So how does this relate to veganism? Well, Monin, Sawyer, and Marquez define moral rebels as “individuals who take a principled stand against the status quo who refuse to comply, stay silent, or simply go along when this would require that they compromise their values.” To me, this sounds like every ethical vegan I know. By refusing to eat, wear, or otherwise consume animals or their by-products, vegans are constantly taking a moral stance and saying to the world, “I do not accept the way things are.”
Additionally, in a society where the consumption of animals is so normalized, I find uninvolved observers – like those in this study – hard to come by. It seems to me that you either take part in the socially entrenched system of animal consumption or you choose to reject it, whether for health, environmental, or ethical reasons. This means that, in the world of veganism and animal advocacy, there are only two groups of participants: actors and moral rebels.
After viewing it in these terms, it no longer seems surprising that our meat eater from the New York Times should feel such schadenfreude and defensiveness towards the vegetarian. After all, the vegetarian serves as proof that the meat eater has a choice, a choice not to eat meat and a choice not to participate in something another views as immoral.
So how does this help us vegans who are trying to change the world for animals? Well, if my past experiences are any indication, defensiveness definitely gets in the way of our being able to change hearts and minds. So understanding the potential sources of this defensiveness may help us in our advocacy.
In fact, this research reinforces something I have often told myself but not always believed: that such defensiveness is not personal. Instead, it likely reflects the gut response most people have towards any “moral rebel,” vegan or otherwise. As I start to view the defensiveness of meat eaters in response to my veganism in this way, I have found it much easier to take my own feelings out of the interaction and instead focus on my message and goal at hand.
Additionally, for me, this research brings home the importance of maintaining perspective, and of remembering that most of us were not always the rebel. By remembering that we were once the actor whose guard may have been instinctually raised by the vegetarian or vegan in the room, maybe we can more easily view the meat eater watching our every move in the hopes of experiencing a satisfying dose of schadenfreude with patience and understanding. And hopefully, by viewing them as moral people who are making immoral decisions, we can move forward towards a goal of breaking down the barrier, finding common ground, and having a productive conversation about animals.
*** 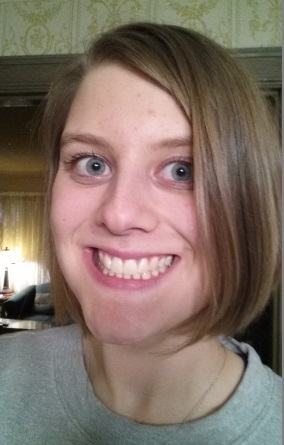