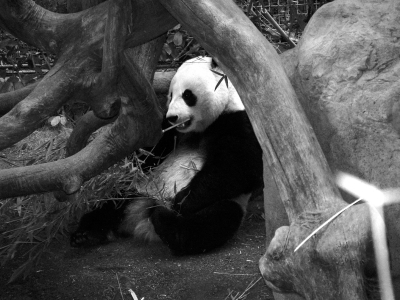 Should We Say Good-Bye to Panda Bears?

We can’t save every animal, but we can save some. When we do, we are choosing who lives and who dies.
People who rescue cats, dogs, and other companion animals know this problem intimately. Do they save homeless animals who are old or sick or don’t behave the way people want them to, or do they kill them to free up space for more adoptable kittens and puppies? Long-term strategies to reduce cat and dog populations, like low-cost spay-neuter programs and campaigns against breeding mills, will alleviate the dilemma someday, but animals will still die today.
Wild animals need saving, too. Entire species are dying off because of human activities like clear-cutting forests, overfishing oceans, and trading in ivory. Our constantly increasing production and consumption and pollution, all linked to our overpopulation, are changing the climate in ways that destroy the ecosystems animals depend on and leave them without homes and food. Things are so bad that scientists consider this a mass extinction event, only the sixth in the planet’s history.
We don’t have the resources to save them all.
So far, an environmentalist ethic has governed organized efforts to save wild animals. The goal has been to protect species from extinction without regard to the price individual animals pay. If saving a species means locking up and artificially inseminating hundreds of its members, that is what conservationists do.
This environmentalist, species-based paradigm isn’t the only way to choose who to help. If we approached the crisis from an animal rights perspective instead, the suffering of individual animals would take priority over the fates of entire species.
Panda bears, whom National Geographic calls the poster child of endangered species, are an interesting case study. Estimates vary, but as of 2004 there were perhaps 1,600 pandas in the wild, and there are now about 300 in captivity. Zookeepers around the world have expended a lot of effort trying to preserve the species through a captive mating program.
“Not everyone believes that the investment of time and money has been worthwhile,” The New Yorker reports, because the odds are long that the wild panda population will ever bounce back. The bears, native to the Yangtze Basin in China, need to eat lots of bamboo – from 20 to 45 pounds every day – but human activities have made it hard for them to find that much of the grass in the wild. “Roads and railroads are increasingly fragmenting the forest, which isolates panda populations and prevents mating. Forest destruction also reduces pandas’ access to the bamboo they need to survive,” according to the World Wildlife Fund.
Because of those changes to the landscape, even if captive mating were a great success and created enough individuals to repopulate the Yangtze Basin, the new animals would be in as much trouble as their forebears. The cost in individual suffering would be high, with hundreds of pandas locked up in zoos and more starving in the wild.
That prospect helps explain British naturalist Christopher Packham’s offer to “eat the last panda” if that meant there would be more funding available for species that had better odds of survival outside of zoos. The comment sounds outrageous (and, to a vegan, revolting), but it actually hides an animal rights argument: the preference for the survival of animals in the wild over keeping them alive in captivity. “Let them go with a degree of dignity,” Packham said.
Wildlife expert David Bellamy also opposes pouring money into captive breeding programs “if there is no wild left” for the resulting animals to live in. “We shouldn’t rear animals just to put them into cages,” he says – even if that means letting a species die out.
Most of the world’s zoos keep their inmates in barren cells with little to do and nowhere to roam. Bringing babies into the world to lock them in cages like that may save a species that can no longer survive in the wild, but only at the cost of individual animals’ misery. While an environmentalist approach might call for the preservation of the species at any cost to its individual members, an animal rights calculus would put a halt to that breeding program. Better for a species to disappear than for all its members to live sad, frustrated lives.