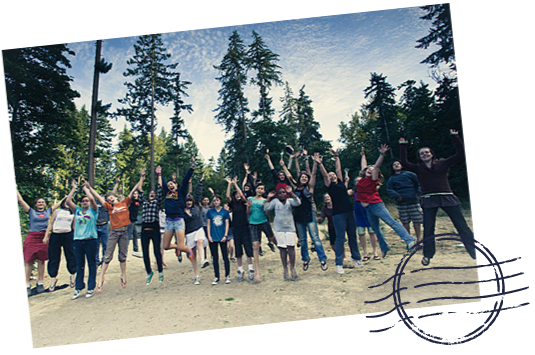 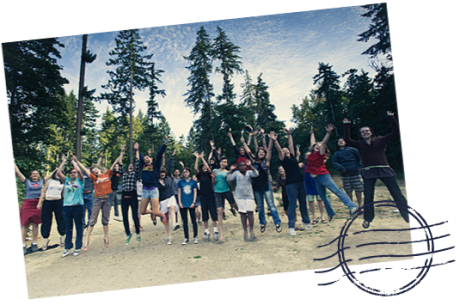 News flash: YEA Camp (that’s Youth Empowered Action Camp) — a leadership camp for teens who care about social justice — is currently hiring counselors, kitchen staff, videographers, and nurses for their week-long overnight summer camps in Northern California, Oregon, and Massachusetts. If you have some vacation time coming up, or you have the flexibility to take this on, and if you are passionate about animal rights and other important causes, you might consider applying. And if you have kids ages 12-17 who want to make a difference in this world, then give them the experience of a lifetime and register them as campers.
Thus concludes my important news of the day. You can stop reading now, if you’d like (especially if you’re interested in applying, since you should really get on that). Seriously. You can go. Unless, that is, you want to hear my own personal horror story of working at a (very different) camp? It’s not like you need to know how I arrived at the moral of my story (which is that, in addition to the importance of finding and fostering safe spaces for children, we adults should find and foster safe spaces for ourselves, too) — which is precisely the opposite of what happened for me during my time working at Camp Hell.
But if you’re still here (You missed the memo, folks! You can go!), then allow me to tell you about the opposite experience of what I imagine YEA Camp is. I think I’ll refer to this as BOO Camp.
There was this one summer — and I won’t say much about it because it’s morning now, and I don’t want to start dipping into the vodka just yet — when I was the drama director at a sleepaway camp in New England. I directed approximately 75 rugrats in West Side Story. Inexplicably, I lived to tell the tale — but just barely. For those six weeks, I literally lived on coffee, and by the time I got back home to NYC, I had lost a substantial chunk of hair from the stress of it all (I’m sure the crazy amounts of caffeine that pulsated throughout my worn body and weathered soul didn’t help the matter). It wasn’t until several months later — after re-hydrating and providing some nourishment to my body and my life, doing some serious meditation, and weening my caffeine-intake to just 4 cups per day — that I realized that the show I directed was good, damn good. Unfortunately, while I was actually at the camp, I could not for one minute stop and smell the roses — I was too busy stepping in the thorns.
That was about 12-ish years ago. My hair, thankfully, has grown back, as has a sliver of my faith in humankind (that changes moment to moment, though). But that summer nearly destroyed me. Even though I was a 22-year-old adult working with other adults, everyone’s world can become very tiny while at camp — and I became the target of some serious taunting.  I thought I had escaped that kind of petulance when I had graduated high school. OK, I admit it. Mr. Holland I was not. In retrospect, I see that I was probably a little too unrelenting with the demands I put on my kids; my standards were very high. I expected Broadway, even though I knew (on some level) that these children were at camp to have fun, and not to become the next Chita Rivera.
But still, I like kids. I mean — OK — some kids. And when I think back on my summer of hell, I wonder if things would have been different had my world — and the world of my campers — not revolved around just us. In the world of theatre there is most certainly the danger of becoming self-obsessed. I see now that during my West Side Story summer, I was probably a bit ego-driven (ya think?!). And I’m sure I took myself a tad too seriously (that will likely be the name of Chapter Three in my autobiography). Even now, when I think back to that summer, I’m left perplexed, and still a little sad about the whole thing. If I only had a support system …
I made a lot of mistakes that summer (I was in my 20s, so I deserve at least an infinitesimal break), but so did the management of this place. They should have listened to my concerns about how my co-workers were bullying me, at times with the encouragement of the campers. They should have helped me tone down my expectations, but, at the same time, supported the show. And, dammit, they should have thrown away all the coffee in New Hampshire. In short, even though the show we put on could have rivaled some regional theatre I’ve seen, my time at BOO Camp was a missed opportunity — several, in fact.
Which is the opposite of YEA Camp! YEA Camp is not just an incredible way to foster kids’ innate compassion, and to teach them to develop actual, tangible, fulfilling, and fun ways to change the world, but it’s also a supportive, safe, and soulful way for grown-ups like us to turn on the light switch for kids who might, for whatever reason, still be in the dark.
When things are so much bigger than we are — such as the nightmare of what is happening to animals — we can’t shut down, and things like ego and social quandaries become much less important. We are there for one common goal: to change the world. We are mere instruments in making that happen. There is community in that, and there are some really good reasons to do it right.